THE CURBSIDE CRITERION: THE STORY OF THE LAST CHRYSANTHEMUM

(As you may have noticed, it’s holiday season! As a result, Hammer to Nail is going to bust out some reviews of the latest and greatest Criterion Blu Rays as well as re-running reviews and interviews of films that are available now. What better gift than the gift of awesome cinema!?! Leading us off is this stunning Blu of  one of Kenji Mizoguchi’s early films, The Story of the Last Chrysanthemum.)

Japanese director Kenji Mizoguchi (1898-1956) is perhaps best known, to casual fans (like yours truly), as the master behind the haunting 1953 epic drama Ugetsu (original title: Ugetsu monogatari). That film’s lyrical blend of harsh realism and supernatural elements, set against the backdrop of civil war in 16th-century Japan, makes for a profoundly poignant – and profoundly cinematic – experience that marks Mizoguchi as one of the great artists of the movie form. Other well-regarded films of his include The Life of Oharu (1952) and Sansho the Bailiff (1954), both of which have already been released on Blu-ray by Criterion (Ugetsu has, so far, only come out on DVD). Indeed, much of Mizoguchi’s reputation rests on the beauty and power of his later output. Now, however, Criterion has just released an earlier work, The Story of the Last Chrysanthemum (1939), on Blu-ray, and though it may not deliver quite the aesthetic punch of what was to come, it is an important milestone in the filmmaker’s œuvre, signifying that moment when he transitioned from journeyman director to budding virtuoso.

In some ways structured like the Hollywood backstage musicals of the era – from the Busby Berkeley –choreographed musicals at Warner Brothers to the Judy Garland/Mickey Rooney pairings at MGM – The Story of the Last Chrysanthemum is also a compelling rebuke to the repressive hierarchy of the Japanese class system. It tells the story of Kikunosuke (Kiku), the adopted son of the great Kabuki actor Kikugoro Onoe V. Expected to follow in his father’s footsteps, Kiku finds himself dissatisfied with his performances, worried that the praise he receives from peers and servants, alike, is due solely to his position as heir apparent. When Otoku, nursemaid to his stepbrother – the newly born biological son of his father – breaks the obsequious spell of silence and gives Kiku a frank assessment of his craft, her refreshing candor awakens a heretofore unknown passion inside of Kiku. Suddenly, he feels the call to perfection, and begins to apply himself to his work. Unfortunately, his family reacts with outrage to Kiku’s new closeness with Otoku, as she is well below his station. Forced to pick between family and passion, Kiku chooses the harder path, and the rest of the movie chronicles his journey as both man and actor as he struggles to find his way.

It’s a beautifully photographed film, filled with an interesting array of compositions, both still and moving. Unlike his contemporary, the equally great Yasujiro Ozu, who kept the camera static in almost all his movies, Mizoguchi builds his mise-en-scène through a combination of editing and mise-en-scène, often using carefully plotted tracking shots, some lasting up to 8 or 9 minutes. His cinematographer, Shigeto Miki (with whom he made 17 films, though not the later works), creates depth in the frame through the use of a wide-angle lens, revealing the elaborate architecture of the Meiji-era sets (the story is set in the late 19th-century). Whether one finds the Kabuki milieu of particular interest (sadly, I do not, beyond the gentle fascination with the unknown), or the melodrama at the center of the tale of particularly affecting (a mixed bag, for me), the painterly quality of the visuals is worth every moment of your time. The two stars – Shotaro Hanayagi (Kiku) and Kakuko Mori (Otaku) – were both veterans of the stage, themselves (and remained stage-bound, not going on to lengthy film careers after this film), and tackle their roles with deep commitment: their scenes together, irrespective of the sometimes excessive sentimentality of the script, are as arresting as the images that frame them. 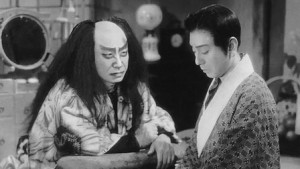 In short, whatever one’s reaction to the story, the movie represents an important stepping stone in the career of a masterful filmmaker. Unfortunately, though Criterion has done their best to restore the print to its original luster, the negative must have been severely damaged, as the quality of the image is not quite what we are used to from the company. Even when clean, the frames appear slightly pixelated, and there are occasional scratches that remain, along with jump cuts from broken frames. It may be a 4k transfer, but Criterion, wonderful as it is, cannot work miracles. The sound is quite fine (monaural, of course, since the film was made in 1939), and what blemishes there are quickly become part of the texture of the viewing experience. The extras that come with the film are a little disappointing, however, as there is just one 21-minute video interview – with film critic Philip Lopate – plus the usual booklet essay – this one from film scholar Dudley Andrew. Still, light as these materials may be (I would have loved to see a piece on the difficulties of the restoration, for example), they are nevertheless chock-full of interesting production information, which informed my description of the film, above. So it is by no means a waste of your time and money to purchase this disc; just be aware that the package is a little less robust than the typical Criterion offering. What follows is my brief review of the two ancillary materials.

This essay offers excellent production history, as well as the real-life history behind the script and historical context of both the 1930s – when the film was made – and the late 19th century – when the film was set. If sometimes marred by excessively abstruse academic jargon and at least one failure to fully identify one of the production figures to whom Andrew makes reference (I looked and looked for a previous mention of a mysterious Shochiku, named in the penultimate paragraph, to no avail), it is still a very useful and informative companion piece to the movie. Andrew sheds light on the recurring figure of the tragic woman in Mizoguchi’s work: “How often Mizoguchi’s women fall or die so their men can rise,” he writes. From what I’ve seen, very true. He draws attention to the director’s long takes and design of the sets, and I love his description of the film as built “on a foundation of modular arithmetic.” Whatever it’s occasional lack of clarity, Andrew’s article is worth reading, as it provides greater understanding of The Story of the Last Chrysanthemum‘s themes and structure.

Recorded in June 2016, this interview, entitled “Evolution of an Artist,” allows Lopate plenty of room to share his prodigious knowledge of the film, and Mizoguchi, in general. Indeed, one gets the sense that 21 minutes is not nearly enough time for Lopate, who seems like he could speak forever on the topic. And while I disagree with him over his claim that The Story of the Last Chrysanthemum is “one of the greatest films ever made” (see my review of the movie, above), his enthusiasm is one of the things that makes this interview so compelling. It’s certainly more accessible to the layperson than parts of Andrew’s essay, which makes it a nice alternative, even though the information disseminated in both pieces has a lot of overlap. Like Andrew, Lopate discusses Mizoguchi’s use of female characters, his prior directing career, his use of long takes, and use of space. In addition, he goes into much greater detail about Mizoguchi’s editing choices and the director’s use of the world of Kabuki to make an implicit critique of comparison of Japanese social hierarchy. It is a solid addition to the Blu-ray package.

Overall, then, I recommend both The Story of the Last Chrysanthemum (even if I don’t appreciate it quite as much as does Lopate) and the Blu-ray, itself (even if it has fewer extras than many other Criterion releases). It’s perfect for fans of Mizoguchi and Japanese cinema.