IN PURSUIT OF SILENCE

There is nothing that I like more than watching a film at SXSW whose theme is driven or informed by sincere technophobia. Past highlights for me are of course the just released Creative Control from last year and my favorite, Andrew Bujalski’s Computer Chess. In Patrick Shen’s latest film, In Pursuit of Silence, we get a fresh look at the dangers of being over stimulated.

The last day of the “interactive” festival is a great thing because it sees the departure of the corporate drone types who jam the bars and restaurants dressed in Friday casual wear of khakis and blue oxford shirts. They let their creative side flare by drinking too many Rob Roy cocktails and letting it all hang out, shirttails boldly flapping in the wind, mouths loudly spouting app chatter with Che Guevera-like Revolutionary zeal. Their departure is met with the arrival of the scruffy music attendees and participants, as the street level din goes way up as every bar has both a band playing inside, on the roof, or in the backyard. Most street corners also have a Red Bull juiced-up crusty banging a pail with a stick. So you can imagine what the noise level is like walking down 6th Street, which is lined with bars on both sides of the street. So it was quite a relief to sit down for a screening at the Ritz and see a woman sitting in front of the screen raise her bow as the plaintive sounds of a cello filled the theater. After a short performance, we all engaged in several minutes of group silence before the lights went down and the film started, silently, as images of nature unspooled. It was a necessary decompression from the mad hullabaloo that is SXSW and it came like a moist towel placed gently across your forehead.

In Pursuit of Silence alternates between lyrical silent moments in which we get to experience ‘silence’ such as one would experience in nature or in an ancient Japanese tea ceremony or in a 100 percent silent Anechoic Chamber at the Orfield lab, mixed with talking head interviews in which we learn about some very real and very scary statistics regarding the dangers of noise. We learn that excessive noise leads to heart stress and medical ailments. We learn that the world has gotten way louder than previous generations and that such noisy environments like giant sports bars contribute to a general lessening of hearing over time. Overall, silence can increase our sense of calm, which in turn is essential for overall wellness. 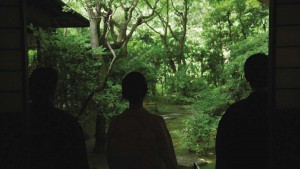 The film also extends the definition of noise to the experience of unwanted data and engagement with personal technology. Shen mentioned that when he first went into the silent chamber he was overwhelmed with a kind of panic because he had never experienced such utter silence before. In the Q&A he explained that he got interested in the subject because he found himself unable to relax due to anxiety caused by over-stimulation through personal technology. A scientist states that the overall disengagement from self and the world through technology will trigger dementia way sooner for this current generation.

The film also explores the philosophy of John Cage and shows some great footage of Cage ‘performing’ the composition “4’33” outdoors in a city. It is a ‘silent’ composition because he sits at the piano and does nothing. The film explores Cage’s lifelong relationship to Silence as a way of provoking us into listening, both to ourselves and the world around us, without a controlling ego trying to guide or edit the arbitrary sounds of either the city or nature. After the first performance of “4’33,” John Cage’s mother complained to John that it was nothing more than a stunt. John responded to his mother by writing:

“The piece is actually not silent (there will never be silence until death comes which never comes): it is full of sound, but sounds which I did not think of beforehand, which I hear for the first time the same time others hear. What we hear is determined by our own emptiness, our own receptivity, we receive to the extent we are empty to do so.” 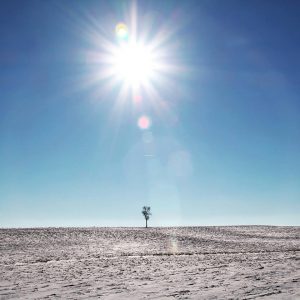 Throughout the film we also follow the journey of a young man who took a vow of silence and embarked on a walk from New Hampshire to California. He communicates with people by writing terse sentences on piece of paper. He writes some thoughts about the purpose of his journey and holds it close to the camera:

“The sources of noise that I am trying to get away from are so embedded in electronics and entertainment that I really could not allow any such distractions. Time away has given me perspective on what I should allow back into my life, and to what extent. Sometimes to really see things the way that they truly are, you have to take a step back, and then another step, and then a few more.”

In Pursuit of Silence is just like that first step back, the first step toward disengaging from technological noise and worthless chatter. The overall experience, unlike with a film like Koyaanisqatsi, is peaceful and in itself meditative, as opposed to threatening or fear-inducing. The film actually helps you take that first step as you experience firsthand the joy of silence through disengagement from chatter devices and noisy environments. That desire to re-experience that silence stayed with me throughout the rest of the festival and I’ve since gotten back into the habit of sitting silent in the morning before touching my cell phone. In this sense I perform Cage’s “4’33” every single day. Shen’s powerful achievement makes you want to regain control over your environment. Hopefully you will be able to experience it in a quiet theater.