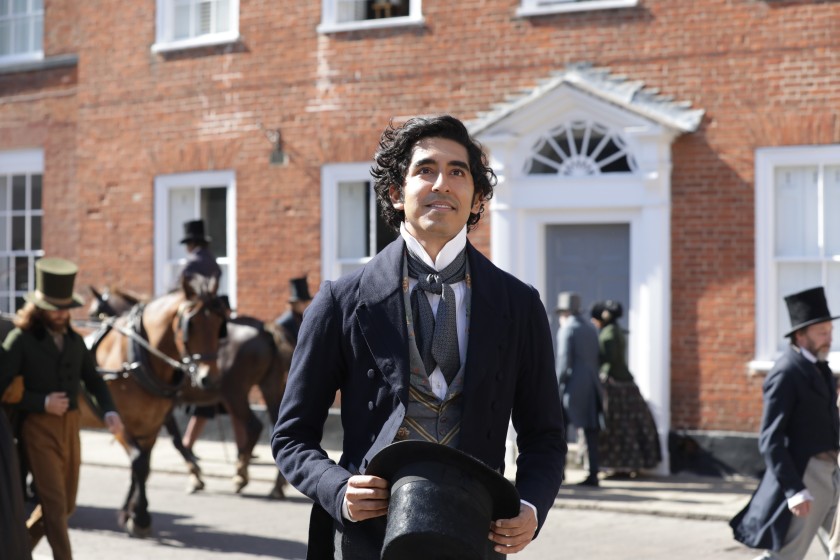 (After a debut at the 2019 Toronto International Film Festival, Armando Iannucci’s amiable The Personal History of David Copperfield arrives on VOD Friday, August 28, 2020 via Searchlight Pictures. Like what you see here on Hammer to Nail? Why not pay just $1.00 per month via Patreon to help keep us going?)

A delightful, sometimes clumsy but always intriguing adaptation of Charles Dickens’s 1850 novel, David Copperfield – full original title “The Personal History, Adventures, Experience and Observation of David Copperfield the Younger of Blunderstone Rookery (Which He Never Meant to Publish on Any Account)” – director Armando Iannucci’s The Personal History of David Copperfield offers a spirited performance by Dev Patel (Lion) in the titular role and a rousing ensemble to back him up. As good as Patel may be, he is almost overshadowed by newcomer Jairaj Varsani as his younger self, so engaging is the boy’s incarnation of “Master Davey.” Irrespective of who is on screen when, however, the film is a rousing good time, though at intervals inconsistent in its application of Iannucci’s trademark irreverent nuttiness. Those expecting full-bore manic folly à la his Veep (the HBO series) or last year’s The Death of Stalin may come away wishing he had not pulled some comic punches here, but there is still enough mayhem to entertain, and more.

The plot is straight out of the book, more or less, though heightened in tone for humorous effect. Iannucci emphasizes Copperfield’s imaginative flights of fancy with elaborate visuals, including projections on walls of flashback scenes remembered by the adult narrator (Patel) who walks (unseen), on occasion, among the figures from his past. Tilda Swinton (The Dead Don’t Die), Hugh Laurie (Fox’s House) and Peter Capaldi (the 12th Doctor Who) all deliver hilarious supporting work as some of the characters important to our protagonist’s development, with Ben Whishaw (Mary Poppins Returns) an appropriately unctuous Uriah Heep, but it is perhaps Morfydd Clark (Crawl), as Copperfield’s sweet, but dimwitted almost-partner-in-marriage Dora (and Copperfield’s actual first wife in the book), who often steals the show. Take your pick: they’re all good, even if the script is not always up to their level, faltering as it does, at times, in its labyrinthine construction.

One of the more interesting aspects of the film, never overtly emphasized but still directly evident, is Iannucci’s decision to place actors of color in prominent roles without regard to genetic logic (or notice by the characters). Beyond Patel, whose Indian background is never once addressed, there’s Benedict Wong (Doctor Strange) as Mr. Wickfield and Rosalind Eleazar (ITV Hub’s Deep Water) as his daughter Agnes, among others. It’s always been a multiracial world, and this is fiction, so why not bring in a strong cast and let them shine, regardless of genes? And when the film works, which is most of the time, shine they do. Like his modern-day namesake, this David Copperfield delivers plenty of magic.