(Pleasant People world premiered at the 2011 Slamdance Film Festival and just appeared at the Chicago International Movies and Music Festival. It screens next at the Atlanta Film Festival on April 30th and May 6th, 2011. Visit the film’s official website for information on upcoming screenings and much more.)

A micro-budget first-time feature by Atlantan David Bonawits, Pleasant People is the story of Jiyoung, a blunt and charmingly naive Korean-American in her late twenties pushing hard to get a career going as a singer-songwriter. Bonawits draws wry, Southern humor and effortless poignancy from the ways Jiyoung (played with intensity and great comic timing by Jiyoung Lee) butts up against the strict social conventions operating just beneath the chillaxed surface of her hometown.

Present-day Atlanta is shown to be on-trend and cosmopolitan—the kind of place where people do yoga and eat falafel. We could easily be in Brooklyn or Silver Lake, but for a certain Tennessee Williams-scented politeness in the air. Jiyoung’s lack of diplomacy and hilariously declarative way of speaking make her a perfect foil for the cool urban types she works and socializes with, the titular pleasant people. Early on she’s given perfunctory praise by the young producer she’s hired to record her music. Looking up from his email, he takes in her childlike enthusiasm (“It sounded really good! You’re a great producer!”) with raised-eyebrow ennui. When her day-job boss at (exquisitely named) megamusicmall.net asks her to turn in some color corrections, she fires back, “They’ll be done after lunch.” “Okay, maybe a quick lunch, in the area,” he replies, “not, like, with a waiter.” 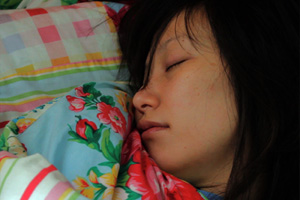 The lunch she’s planning is an opportunity to spend time with co-worker Josh, the gently oafish man-child she’s oddly enamored with. Jiyoung has given him a CD of her music, but she isn’t happy with it and makes the first of many requests to get it back. Josh casually blows her off, unaware of how much the lunch and the CD mean to her. Later she calls to invite herself over to his house; when he demurs she shows up anyway, within seconds, bearing a gift of a ceramic black mammy that belonged to her grandma. “I thought since you like smoking stuff it’d be nice if you put weed in it,” she offers. “Wanna go out for burgers sometime?”

Frustrated by Josh’s vague, unfulfilled promises, Jiyoung tags along to her frenemy Becca’s house, where a wonderfully insightful, drunken girl’s night out sequence builds to a stand-off that pinpoints the film’s central theme. Showing up under-dressed, Jiyoung suffers the ultimate invisibility: getting left out of the Facebook snapshots; as her cat allergy symptoms get worse, she tells an uneasy-looking Becca, “The problem isn’t my eyes, it’s my vagina.” Then, as they’re about to leave for a club, Becca takes her into the bedroom and offers to loan her a series of sexy outfits, using all the peer pressure she can muster. Jiyoung considers and refuses each one in turn.

As the people around her start families and grow into their adult lives, the CD that Josh won’t return becomes an obsession for Jiyoung, a symbol of everything that feels stalled. She makes a reckless move that backfires badly, leading to a series of excruciating/hilarious confrontations. There can be no real arc for a character as fully-formed as Jiyoung, but she’s forced to take a step back and contemplate a change of course, to keep her dreams on the table.

Bonawits’s clean and understated style, ear for dialogue, and eye for painting time and place create a rich setting for Lee to shine. Jiyoung is a shimmering, vivid creation, a funny, otherworldly, modern day antihero. Whether explaining the precise meaning of “brown-nosing” or pushing one of her songs on a squirming fashionista (“Can you release it on your label?”), she cuts through the dissimulating banter of her peers, either heedless or unaware of the consequences.

While generally in the Judd Apatow universe of contemporary, character-driven comedy, Pleasant People more specifically brings to mind the “small, human and humorous films” of Alexander Payne, as well as the intimate, 1970s-era work of Mike Leigh—backing off the jokes and allowing characters and narrative to develop organically, making room for humor rooted in the absurdities of the social contract, and the cross born by those who violate it.