(The Windmill Movie is being distributed theatrically by The Film Desk. Accompanied by Richard P. Rogers’ 1970 short film, Quarry, it’s now playing at the Film Forum, before expanding to more theaters throughout the country. Visit the film’s official website for more information.)

I have now seen Alexander Olch’s The Windmill Movie twice. After a first viewing, my reaction was marginally favorable. I had nothing critical to say about the film’s technical merits, yet on a more ethical level, I wondered if it should have been made at all. In attempting to make sense of the unfinished lifelong autobiographical project that Olch’s former teacher Richard P. Rogers had never been able to finish himself, Olch was traversing seriously risky terrain. Did the world really need yet another film about an overly self-reflective, over-privileged white man grappling with his life? Then I watched it again—for reasons I will get to later—and something magical happened. Those nagging concerns disappeared completely. On this second viewing, the film pierced me to my core and left me deeply shaken. I felt as if I had just watched a man’s entire life unfold before my very eyes. It made me very, very sad.

To his credit, Rogers was as skeptical of his own project as his harshest critic would have been. He tells us this at the very beginning, in two revealing clips of self-reflection. In one, he videotapes himself looking in a mirror, acknowledging this glaringly metaphorical act as being the ultimate cliché: the artist turning the camera on himself. In another, he recognizes the brazen arrogance of an over-privileged Northeastern WASP complaining about his stilted, dysfunctional Hamptons upbringing (interviews with his overbearing, anti-Semitic mother hint at that dysfunction). But these were the cards he had been dealt, and for a sensitive artist like Rogers to simply shrug it off was impossible. His inability to wrap his head around this never-ending project speaks further volumes about his own self-awareness and skepticism. Yet the fact remains: Dick Rogers was an artist, and obsessive self-exploration is often the meatiest fodder for an artist such as himself. 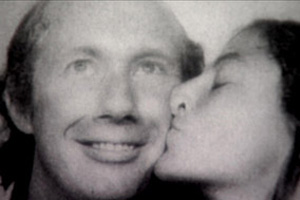 As a filmmaker, Olch is aware of this inherent dilemma as well. While he might not say it, I will: there is no way in hell Dick Rogers ever should have finished this movie. It needed some level of remove. Both times I saw The Windmill Movie, I couldn’t help but compare it to Charlie Kaufman’s Synecoche, New York, another film I watched twice to see if it would sneak out of my brain and into my stomach the second time around. But with Synecdoche, that second viewing only left me feeling more removed and wishing Kaufman had found a way to bring some objectivity—or less ultra-hyper-uber-self-obsession—to the table. Had Rogers lived long enough to edit the film together himself, I am confident that it would have been too utterly self-absorbed and, thus, unsuccessful. As aware of his situation as he was, he still couldn’t have transcended the insurmountable wall that was such an extremely personal project. Olch inserts himself into the film as a narrator—first, as himself, and next, as Rogers. Another risky proposition, but it proves to be a very necessary one, for it grants us an even somewhat tiny measure of remove from Rogers’ self-obsession, turning his hyper-specific story into something more universally resonant.

In life, Rogers was known for being incredibly charismatic. Though he lived with his girlfriend, photographer Susan Meiselas, for much of his adult life—and whom he finally married in his waning years—he was always juggling multiple girlfriends. The reasons for this aren’t probed too deeply in the film, but they are granted some measure of an explanation in Meiselas’ long work absences. Like most weak men, Rogers got lonely, and he did what he felt needed to be done. While this behavior is never to be commended, in this context, it adds another layer of sadness to Rogers’ situation. It’s yet more proof of his overwhelming insecurity and sensitivity. Olch has stated that one of the most difficult things about making The Windmill Movie was that he only had footage of Rogers at his most somber and, in many ways, reprehensible. But that’s what makes the film so striking. We are watching a man who has turned the camera on himself, but who has done it in a deeply private, diary-like manner. In this way, the film plays like a hidden, suppressed interior monologue as opposed to a showy video autobiography. Robert Humphreville and Michael Montes’ elegiac score only enhances this mood.

The Windmill Movie is more than just a devastatingly, achingly intimate exploration of one sensitive artist’s psyche. It presents the indifferent, oceanic sweep of human existence with grave sadness and beauty. This certainly isn’t the film Dick Rogers would have made out of all this footage, but one feels confident that he would stand behind Olch’s profoundly moving achievement.

NOTE: For The Windmill Movie’s theatrical release by distributor The Film Desk, the feature is preceded by Rogers’ 1970 short, Quarry (the reason for my second viewing of Windmill). Quarry is an unqualified masterpiece, a glimpse at a fading generation as a group of teenagers gathers at a quarry in Quincy, Massachusetts, in the summer to drink and smoke and hang out and jump from great heights into the water below. Rogers injects an element of political gravity into his 12-minute film, which turns an excellent time capsule into a definitive statement of a generation. It’s difficult to say for sure, but I feel very strongly that watching Quarry before The Windmill Movie opened me up further to Olch’s film.

A Conversation With Alexander Olch (THE WINDMILL MOVIE)