THE WORLD BEFORE YOUR FEET 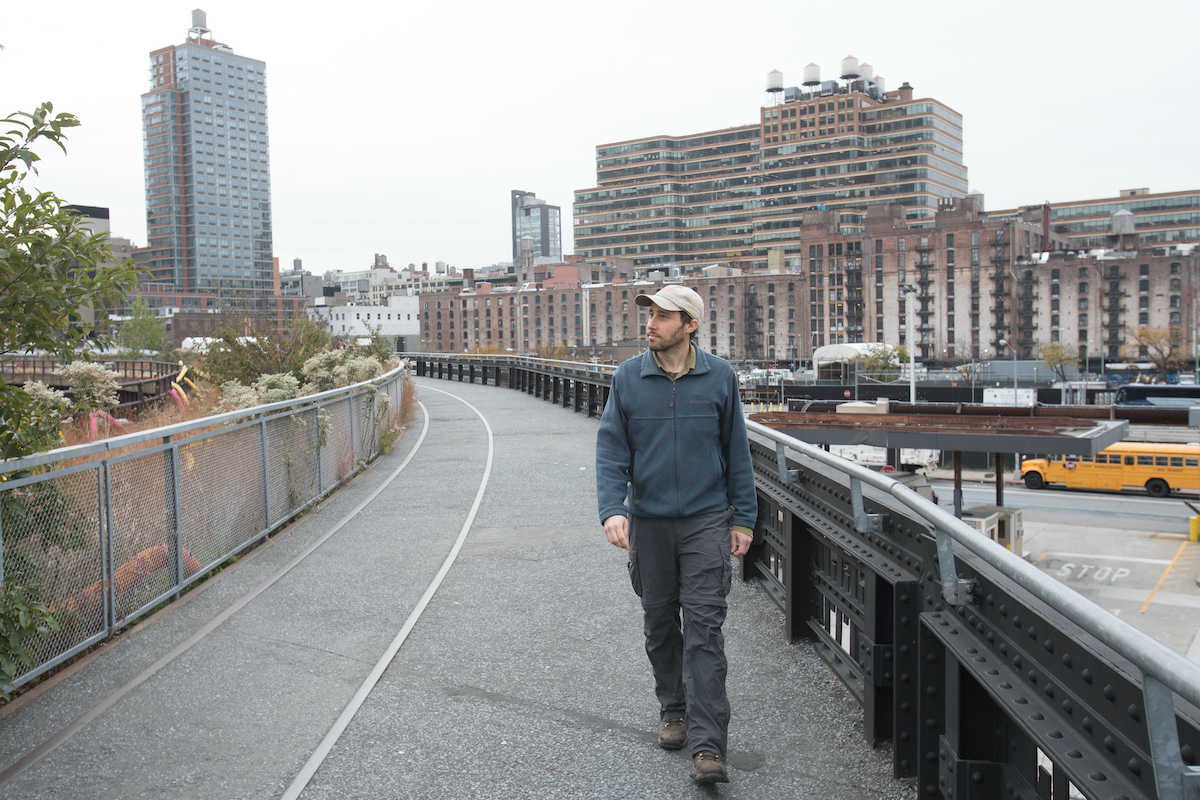 Feet were made for walking, and former civil engineer Matt Green has a plan to use his to cover every block of New York City. Homeless by choice – it allows him to live on $15/day or less – Green stays in friends’ apartments, or cat-/dog-/house-sits at places he finds online, slowly chronicling his odyssey on a blog entitled I’m Just Walkin’. Sometimes he meets up with others with similar pedestrian goals (including Garnette Cadogan, a person of color who rightly points out how he would face very different challenges with this project then does Green), but mostly he walks alone, planning his itinerary based on where he has last spent the night. All of this is covered in the new documentary The World Before Your Feet.

It’s a simple life, but a rewarding one, too, as Green is extremely sociable, both with animals (we get some cute shots of those he cares for) and people, making friends wherever he goes. Filmmaker Jeremy Workman (Magical Universe) is right there with him, documenting this incredible, possibly quixotic, seemingly never-ending ramble for all to see. The movie is great fun, and also very informative, as Green is a terrific and well-educated guide to the Big Apple. I, for one, had never heard of “churchagogues” (as Green calls them): old synagogues converted to churches as neighborhood populations change. The film is full of such entertaining tidbits.

This is not, in fact, Green’s first trek: he previously walked across the United States in 2010. The eldest of two children, he was, almost two years later, shaken by his younger brother’s stroke, which came on the heels of an accident in which he, himself, almost died. It therefore seemed like a good time to take stock of his life, so he quit his job and embarked on this new, crazy journey, starting in late 2011. Fortunately, he had saved up some money, and so was hardly penniless; given his current frugality, he seems well-poised to continue without gainful employment for some time (donations made on his blog don’t hurt, either). That doesn’t mean that his parents – whom we meet – don’t worry about him, but they also respect his decision and search for self. Call this the ultimate walkabout, then, and hope for the best.

Workman films Green’s daily routine with a variety of cameras, including the ubiquitous drones of today’s documentary world, which here help to show us needed context: New York in all its glorious geographic and demographic diversity. With over 8000 miles to conquer (6000 miles of city streets, and an additional 2000 or more of the parks, etc.), Green will not be done anytime soon, so perhaps the director can return for a sequel/update in a few years time, to see how the thirtysomething Green is faring. As friendly as he is, loneliness is an occupational hazard, and the former fiancée and former girlfriend Workman interviews, who wax not a little wistful at the good man trapped in an obsession, attest to opportunities for companionship gone by. Still, if he ever does complete his self-appointed task, Green will have a lifetime of stories to tell. Until then, he – and we – have this marvelous film with which to pass the time.