Since the 1960s, German filmmaker Werner Herzog has spent his career exploring the wonders of our world, usually by concentrating on extreme characters in extreme situations, in fiction and documentary films, alike. In films from Aguirre, the Wrath of God to Fitzcarraldo to Bad Lieutenant: Port of Call New Orleans (fiction) and Fata Morgana to Little Dieter Needs to Fly and Grizzly Man (documentary), among many others, Herzog tells stories about people on the edge, from whose unique madness emerge transcendent quests for the meaning of life (of, of their lives, anyway). He narrates his own nonfiction work, and we, his fans, have grown accustomed to his sincere monotone that guides us safely through the perilous channels of insanity. Herzog is a cinematic wonder unto himself, a gift to the global audience, and if individual films of his are less successful than others, his overall body of work is a stunning testament to the power of creativity and art (and creativity in art).

In his newest film – a documentary – entitled Lo and Behold, Reveries of the Connected World, Herzog tackles the internet, that information super-highway that defines our modern era. If there’s madness afoot here, it is below the surface. As per his usual modus operandi, the director casts a wide net within a relatively defined space; though his subjects come from vastly different places and outlooks, everyone involved discusses the impact of technology on their lives. Divided into ten sections, with names like “The Early Days” (in which we visit the birthplace of the internet), “Life Without the Net” (in which we ponder the unthinkable), “The End of the Net” (even more terrifying), and “Artificial Intelligence” (in which we depart from our main subject to consider other uses of technology), Lo and Behold presents a mostly interesting series of vignettes that meander from A to M to B to Z and, sort of, back to A. This is not, by a long shot, Herzog’s most focused film. It does, however, contain his familiar metaphysical musings, and given the relevance of the film’s overall topic, there are at least a few anecdotes for every kind of viewer, even if the whole lacks perfect cohesion. 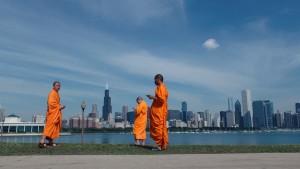 If one enjoys Herzog, however, perhaps consistent narrative coherence is of minimal importance. It’s a pleasure to spend time in the company of the director and his subjects, like attending a dinner party with very smart people (many of whom seem to come from Carnegie Mellon). We learn the content of the first message ever sent from one computer to another over a network (hint: it’s part of the title of this movie); we meet innovative scientists such as astronomer Lucianne Walkowicz, who studies sun flares (which may make technology irrelevant if we are all wiped out); we even meet people who cannot be anywhere near technology. Only Werner Herzog could combine all of these elements and then throw some bluegrass music into the mix, as well. If, at the end, we’re not quite sure what our takeaway is supposed to be, at least we’ve spent 98 minutes having our minds blissfully stimulated. That, in and of itself, is no small feat, and makes the film well worth seeing.