(Trey Edward Shults’ Krisha blew both audiences and the jury away at this year’s SXSW film festival. In fact, it won both the jury award and the audience award for it’s raw and brutally honest portrayal of a family picked apart by addiction. It’s now making the rounds on the festival circuit and is, by all accounts, a must see.)

Maybe “all happy families are alike,” it’s hard to say. I don’t know any. Each “nuclear family,” using the term in the best possible sense, comes with layers that cannot be shed, pasts that won’t stay hidden. In a sense, the past never leaves; instead it lingers, festers, waiting for its chance to regain the spotlight, ruining an otherwise unspoiled present. After all, that’s what Thanksgiving is for. The double-decorated SXSW award winning Krisha, Trey Edward Shults’s first full-length effort, is an exorcism of the highest order. Shults publicly casts off his private demons in the hopes of an escape, or, at least, a reprieve.

Shults casts his mom as his aunt and his aunt as his mom as he himself assumes a minor role, the centerpiece around which the storm swirls. The titular Krisha returns for the holidays after a sustained absence, one that is unclear if it was chosen or imposed. From the outset, Shults leaves the audience stranded with Krisha, seeing things solely from her point of view. As she approaches the house (after first knocking on the wrong door) the camera slowly comes down from on high and settles at her level; it’s almost as if Shults is letting us know that we will be granted no distance from this woman, ever. The door opens, she is greeted warmly and yet, an undeniable dread pervades the forced hugs and small talk. 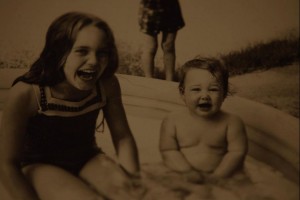 Krisha is intent on making good: she will smile when she is supposed to, she will not overwhelm people, she will make the turkey. As the day unfurls – computer problems are fixed, arm wrestles decide bragging rights – Krisha settles in, whether cautiously approaching her estranged son, or hamming it up with her brother-in-law Doyle. It seems like maybe Krisha has turned a corner, maybe she can be a person among people. But, ultimately, Shults’s steady hand does not waiver; some people don’t change, our pasts run faster than we can.

She just can’t help herself. Granted a small private moment with her son, Krisha oversteps her boundaries, apologizes for it and proceeds down that rabbit hole as the camera ever so slowly pushes in, taking all the air out of the room. Krisha has returned to show her son that she’s changed, that she’s better, that she can be trusted and yet with every scattered thought, each muddled syllable that escapes her lips, she further buries herself in her self-made nightmare. This unraveling is exactly why Trey doesn’t trust her, why he doesn’t need her, why he’s better off without her. And with this as a send off, Krisha begins her descent. Crowding every conversation like a rumor, like an open secret, lies Krisha’s addiction.

She retreats to self-medicate, secretly drinking a bottle of wine she smuggled into the bathroom. Here, Brian Mcomber’s propulsive score, a score that accentuates the material yet does not announce itself, recedes as a Nina Simone song takes over. As Krisha saunters through the house in slo-mo, the tension Shults builds is akin to a thriller. We are marooned with Krisha and her failures– the rest of the family is on a different planet. In what feels like an inevitable conclusion, Krisha, and we, are brought back to reality as it all comes crashing down. 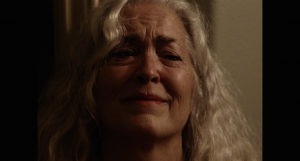 After a blow-up that destroys the good cheer of the holiday, Krisha wakes up in her room, but something is different. The room feels smaller; Shults has shrunk Krisha’s world, switching from widescreen to 4:3. The change is slight yet speaks volumes. Shults and cinematographer Drew Daniels ever so slightly box Krisha in over the course of the film until she has nowhere to go. Shults has described his family drama as a war film, as Krisha battles herself, circling the drain of addiction, waiting to feel her feet touch rock bottom. But, perhaps, one cannot feel the ground if you’ve been standing on it all along.

Much has been made of the fact that Shults uses his real life family members and rightfully so. Shults openly discusses his family’s past battles with addiction, how the story is an amalgam of a number of relatives and their respective struggles. Krisha Fairchild astounds in the lead role; her performance uncoils in a way that sets your teeth on edge from start to finish. Shults’s mother Robyn, a therapist, similarly turns in a restrained yet gut-wrenching turn. Together, the sisters’ dynamic transcends fiction melding their history with the loosely fictionalized one Shults has presented.

The day I saw Krisha, I also watched a block of short films. After the screening, a dozen or so audience members came up to a friend and informed her that her film had been their favorite as it was by far the most “real.” Person after person had a near identical response. A week prior, Krisha took home the Grand Jury Prize and Audience Award at SXSW, a rare feat tying audience appreciation and juror support together. It’s not so surprising. Shults has made a film that is real, that is true. That is what we respond to, what we crave. And he didn’t even have to leave his parents’ backyard.