(James White premiered at the 2015 Sundance Film Festival and is slated for wide release on November 13 via The Film Arcade.)

The portraiture of private grief is a well-worn genre in film for good reason. Film’s language breaks through the surface of story and plot to an ineffable moment; a character’s grief throws them to the past, obscuring their future, encasing them in a present that is forever fleeting, yet endless. In film, that moment is simultaneously completely private, and totally open—each character’s privacy is, by definition of its existence onscreen, a public event. A director who approaches the subject must decipher and define the relationship between the character and their grief. In Kieslowski’s Blue, Julie is marooned in a purgatory of her own creation, in Todd Field’s In The Bedroom, a sinister haze enshrouds Matt and Ruth as they are overcome with revenge fantasies, and in the Dardennes’ The Son, a secret nearly overwhelms grieving father Olivier, to name but three prominent examples. In each of these movies, the distance the director puts between the character and their burden defines our relationship to them.

In Josh Mond’s debut feature James White, the titular James pushes back against the weight of a grief that nearly crushes him. James, played with equal parts livewire nerve and aching regret by Christopher Abbott, is consumed by a confused sense of longing for a father who recently died but in spirit had long since departed. Mond has been open about the autobiographical nature of the story and it shines through; Abbott’s performance and Mond’s intense proximity with a largely handheld camera creates a tactile, lived-in quality that makes it all feel right there. James’s anger and longing hovers around him, just past the tip of his nose, and thus, so too does the camera. The first sequence is an extended long take done in close-up on James in a club, then going out into a far-too-bright New York City morning and into a cab—James gets no reprieve from his agony, no break, so why should the audience be given one with the luxury of a cutaway? If James has to live in this, then, Mond seems to be saying, so do we. 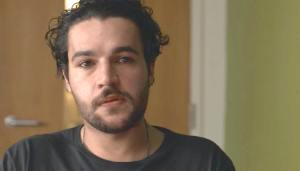 James takes this cab to his mother’s apartment on the Upper West Side for his father’s Shiva. His mother Gail has cancer yet is intent on maintaining an autonomy that with each scene further escapes her grasp. Cynthia Nixon as Gail approaches the role with a stoic bravery and a fevered abandon—neither actor overshadows the other in James White, rather it’s their ferocious compassion of spirit in tandem that make up the heart of the film. They balance one another in each scene in a way that feels completely unsettled, always teetering one way or the other without tipping over. Each performance completes the other, together finding a rhythm and balance through their deep connection as actors and thus characters.

The grief that shackles James—one parent gone, one slowly departing—disables him from being a fully functioning person in the world. He abuses alcohol, picks fights with strangers, mistreats those he loves all because he refuses to play by the rules of a world that has time and again let him down and caused him nothing but immense pain and heartbreak. When he arrives back at his mother’s apartment later on, the guests are playing a video of his father and new bride’s wedding, displaying a tone-deafness he can’t comprehend and so promptly kicks everyone out. They think him way out of line and he couldn’t care less: to James, they just don’t get it. Yet, buried deep under the frustration and angst in Abbott’s seething, teeming, performance lies a nagging feeling that perhaps it’s not as cut and dried as he thinks it is; James bounces within these extremes and can’t find “all this space in between,” as Gail tries to explain to him. And it’s this in-between-ness, this space where everyone else seems to live, that keeps James searching for truth, and meaning; this grounds Abbott’s James, it’s what brings him down from his furious highs and up from his pitiful lows. He wants to be able to meet himself in the middle.

James does adapt, he does grow and these steps forward are born out of his unfailing love for his mother, his one true companion. All of his anger falls away when he cares for her; he cuts trips short to spend grueling overnights bedside, grounding his life to a halt. Or, perhaps, this is his life, and that is what James refuses to accept yet unflinchingly barrels toward. James White teaches James White that there is tragedy in our world; it is unfair, it is unexplained, it is unbearable, and yet, we are faced with no choice. We go on.