(Easier With Practice opened theatrically in New York City and Los Angeles on Friday, February 26, 2010. It is now available on DVD. Visit the film’s official website to learn more.)

Kyle Patrick Alvarez’s Easier With Practice is one of those American independent dramas that for no explicable reason hasn’t received the attention it so rightly deserves. Granted, it won the Grand Jury Prize when it world premiered at the 2009 CineVegas Film Festival, followed by another immediate win at the Edinburgh Film Festival for Best International Feature. But whenever I bring up the movie to friends and associates, they act as if they haven’t even heard of it, let alone seen it. Hopefully that will change starting right now, as Easier With Practice arrives in theaters just one week before the Spirit Awards, where it’s nominated for two prizes: Best First Feature and the Someone To Watch Award.

In his feature film debut as a writer/director, Alvarez and his team have delivered a top-notch production every step of the way. Easier With Practice looks good, sounds good, and is extremely well acted. But what distinguishes this low budget effort from so many others on the festival circuit is not just the story Alvarez tells, but how he tells it. Beginning with a catchy—dare I say quirky—hook (based on the GQ article “What Are You Wearing?”), he gradually, deceptively draws viewers into a more joltingly personal place. By the conclusion, you’ll wonder how Alvarez managed to go from there to here, and you’ll be all the more surprised and impressed because of it. 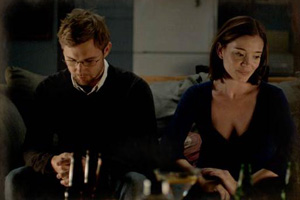 A closed off author, Davy Mitchell (Brian Geraghty), is on a book tour road trip with his brother Sean (Kel O’Neill). A moment of extreme chance leads to Davy becoming entangled in an intimate phone relationship with a mysterious woman named Nicole. Repressed beyond belief, Davy is an extreme case of a writer who only feels free and alive when he’s writing. In his everyday life, he is a timid shell of a person. When he does get close to an attractive three-dimensional woman, he clams up. His relationship with Nicole, based on an oddly detached intimacy, enables him to open up to someone without having to “open up” to her. But eventually this long-distance approach has an equally adverse affect on his psyche, so Davy presses the issue and convinces Nicole, who has a boyfriend, to meet up with him.

Up until this confrontation, Easier With Practice seems to be primarily a depiction of that puzzling “inner vs. outer life” dilemma that has plagued writers since the beginning of time. And while Davy and Nicole are always on the telephone—no internet video chatting?—it also explores the convoluted dynamics of virtual relationships vs. actual ones. But when that third act twist arrives, Alvarez’s film becomes something else entirely, a fully sobering and sad and honest representation of modern psyches at their most fragile and frail.