(In our new series “The Blueprint,” producers and directors discuss more pointed aspects about their filmmaking process. For the first installment, Hammer to Nail writer and Forty Shades of Blue line producer Mike S. Ryan asks director Ira Sachs about the inspiration behind his seemingly incongruous—yet deeply emotional—visual approach.)

Anthology Film Archives is running a fantastic 12-film Rip Torn retrospective which includes some truly rare gems. Though I find Maidstone to be a true curiosity, infamous for the You-Tubed ‘real’ fight between Torn and Norman Mailer, I have a real soft spot for Payday, in part because it may be one of the best films ever made about life on the road for the traveling musician. But my favorite Rip film is by far Ira Sachs’ Forty Shades of Blue. Despite being one of the film’s producers. this is my fave because it really taps into the inner Rip. Having worked with Rip, one of the things you become aware of is how much is really held back by the man. What is so great about him is that he always seems like he might explode and attack you (like he did with Mailer), but just watching him holding back is really what is exciting. I always thought of him in terms of his bluster, but once you spend some time with him you become aware mainly of his insecurities and his inner doubts. 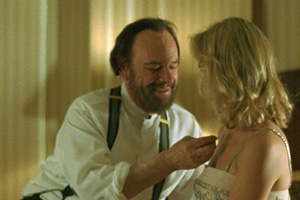 No film in this program better gets into the ‘inner Rip’ than Forty Shades of Blue, and yet the film isn’t just about his character. It’s a true ensemble piece where we absorb the outer tension brewing between father and son (Darren Burrows) as well as the inner tension lurking under the thin, pale skin of the fragile Russian beauty (Dina Korzun) who is Rip’s mail order bride. There is so much going on in Forty Shades of Blue, but what is most interesting is how Ira manages to convey so much inner turmoil through the use of mostly long wide shots. This is what I find most intriguing about the film and so I asked Ira to talk about how he settled on this strange use of the mostly wide social realist camera style to tell this inner drama.

It’s interesting to note that after our first week of filming, the investors—as investors often do when you are making an art film—kind of freaked out. “Where are the close-ups?” demanded one of them. Indeed, you can understand their concern. How can one get inside a character’s state of mind by keeping the camera wide? Well, there are many past examples of this, but below Ira talks about the influence of early Ken Loach.

Yes, Loach, particularly Kes (1969), Family Life (1971), and Looks and Smiles (1981), were big influences. I had seen all his films at a retrospective at Lincoln Center, and the particular intimacy/distance in these works I connected to deeply. This was the time when Loach was working with Chris Menges, and the shooting style they arrived it in these fiction films came straight out of photo journalism, by way of cinema verite. But if you look at those films, they are also very beautiful. You can stop the image at any time and its usually a beautiful still. There is a very controlled and elegant sense of framing, and the use of light is very detailed, and textured. Characters are also always observed within architecture, and space, they are always part of their environment.

In preparing this film, the DP Julian Whatley and I studied those films closely and we discovered that the shooting language was based often on a triangular relationship between the camera and the actors. The camera was never placed between two people, but more often at a tangential angle, not to be obscure, but to create movement by “following” action. The actor moving across space determines the movement of the camera. This is very different than the language in Married Life. I always approach the shooting of a film through other films. I never assume I’m going to invent the wheel, but instead that I am interpreting other movies in a way through my own. I am studying the syntax, the grammar, of this past work, and then, by a commitment to the particular emotional and narrative demands of my story, it will become its own.

For Married Life, I worked with Peter Deming, whose films with David Lynch I had particularly admired (Mulholland Drive, Lost Highway), and we studied most closely people like Otto Preminger, and Hitchcock, and also the cinematography in general of Gordon Willis, who has a modern/classic approach to lighting, in a way not dissimilar to Menges for Loach. Shadow and the feeling of light through darkness are crucial to them both. Married Life has a more classical approach, in terms of the camera movement, and placement, certainly, and is much more subjective, you might say. But I think if you watched the two films back to back they would look much more similar than you might think. There is an even distance/closeness in both.

The other big influence on Forty Shades was Satyajit Ray’s Charulata (also called The Lonely Wife), which is the story of a triangulated relationship between a husband, a wife, and a young man. It’s a wonderful and emotional film, and my co-writer Michael Rohatyn and I basically took the story and made it our own. As in shooting a film, in writing movies, I often go back and translate previous movies that have worked really well for me. The Delta, for example, is a loose re-working of Bergman’s Summer With Monika. But you can’t really tell by the time the movie’s done.

So please take this rare opportunity to catch a 35mm print of Forty Shades. It really needs to be seen projected not only because slow films play better on big screens but because the film is really so dark that it just has more presence in 35mm as opposed to on DVD.