MIKE S. RYAN AT SUNDANCE ‘10: DAY ONE – Sundance Gets Mavericky

This year’s Sundance Film Festival theme, pushed via trailers and the cover of the film guide, is: REBEL. Trailers push lines like “this is the rebirth of the battle for new ideas” and other blather like “this is the recharged fight against the establishment of the expected”. The REBEL message is so obviously a result of Sundance’s fear that they have become the Hollywood establishment and that their position in the new world of indie film is seriously in jeopardy.

Unfortunately rebellion is more than a slogan, or a fist in the air gesture. So far it doesn t seem like the films uphold that message. We will try and see as many of the NEXT films as possible but from what we’ve seen and what we’ve heard about others, it’s the same old unambitous writers lab graduate films. But it’s only day one so we shall see. I saw four films, one of them at Slamdance. 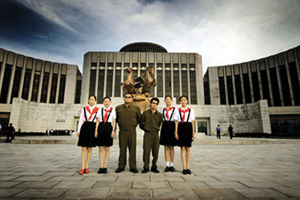 The Red Chapel really gets under your skin (read Pamela Cohn’s full review here), but this is a doc that takes both the filmmakers and the audience by surprise. For me, though I love the intent of the Yes Men films, they’ve always seemed to me as somewhat dramatically rote. The Red Chapel truly feels like a journey that began with one intent and then the situation leads the film into an unexpected confrontation with a reality way fiercer and larger than was first imagined.

Gaspar Noe’s Enter the Void had its US premiere in the Spotlight section, which is the Sundance section newly created to show films that first screened at other festivals. Enter the Void is a genre film—the drug trip trance mondo genre—and it is not for everyone. In fact, during this 156-minute version (2o minutes will be cut for its theatrical release) the audience was streaming out once past the hour mark. The normally lightweight non-cinephile Sundance audience (which seems even worse this year with the decline of industry attendance) was completely unprepared for the hardcore visual battering onslaught that is a Noe film. Love it or hate it, as was the case with Antichrist, the pure visual brilliance of this film cannot be denied. Anyone who brushes it off or calls it stupid is an idiot. There are images in Enter the Void that have never been up on the big screen before. Even if you hate the vibe and what those images are you must respect the pure ambitious original energy. The film also goes where no other first person POV film has gone before. It starts where Lady in the Lake left off, the camera is our POV and then it lifts off even above that as the main character starts to levitate above his own body. The only films that come close, in pure visual originality, are Crispin Glover’s What Is It? and It Is Fine. Everything Is Fine!. This is mondo madness at its ballsiest. See it on the big screen but be prepared to go where you have never gone before. It’s a work of such developed visual originality that very little can compete.

Back at Sundance, I was very impressed with the restraint and lack of sentimental quirk in Get Low. An old man preparing for his own funeral story that stars Robert Duvall, Sissy Spacek and Bill Murray, I was expecting the worst but was very pleasantly surprised by Aaron Schneider’s spot on direction. I think this film will be the sleeper hit of this year. Sony Classics made a smart move acquiring this one at Toronto.