THE COMPLETE HISTORY OF SEATTLE

(Nick Toti’s intriguing doc The Complete History of Seattle made it’s online debut this week on Fandependent. You can watch it for free right now then become a fan to help it win a distribution deal!)

The Complete History of Seattle doesn’t just eschew the band documentary formula. Nick Toti’s film, which is mainly about 90s Christian experimental punk group, Raft of Dead Monkeys, binges on the genre and then simultaneously craps and barfs it back up. Believe it or not, this is not a criticism. It’s quite refreshing and exciting to watch something from a typically formulaic genre and not have any clue where you’ll end up.

Part of the reason the film is structured this way is due to Raft of Dead Monkeys’ wholly unique stage show. The band rose from the ashes of 90-Pound Wuss and Roadside Monument – two popular Christian punk bands that were darlings of the faith-based Seattle indie label Tooth & Nail. Taking their name from a throwaway joke in an Adam Sandler SNL skit, they were not your garden variety Christians. Raft’s music was particularly profane and noisy, and their performances invoked many provocative images including bloody crucifixions, fascism, monkeys barfing bananas, male and female go-go dancers, and sexy junkie nurses (played by their wives and girlfriends). At the time of their formation, the band members were feeling disillusioned and alienated from both their fellow Christian musicians and the secular punk scene at large. According to their manifesto, they were attempting to create the music that would usher in the apocalypse. In response to feeling shunned, they basically became Christian anarchists. 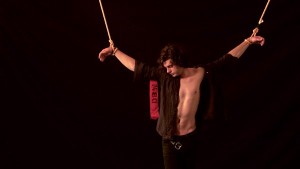 Toti interviews all the surviving members (guitarist John Spalding died of cancer in 2008) as they look back – almost in disbelief – on their heyday. Since not much actual footage of their shows exists, Toti recreates several of their motifs in an avant-garde style, with actors in front of black backdrops. This makes up the second most compelling aspect of the film.

The most compelling thing about Raft of Dead Monkeys is how they tied into Mars Hill Church – a pseudo liberal mega church headed by a controversial pastor named Mark Driscoll.

From 1977-2002, underage entertainment was severely hindered by a draconian law known as the Teen Dance Ordinance, which featured a number of expensive and challenging requirements including $1 million in liability insurance and two off-duty police officers at every event. This law was single-handedly responsible for shutting down numerous all-ages venues in Seattle throughout the nineties. However, non-profits were exempt from the ordinance. Mark Driscoll took note of this loophole and seized the opportunity to recruit hip youngsters to his then-fledgling church by opening a club called The Paradox.

The Paradox lasted from 1998 to 2003 and was funded by Mars Hill Church. It held mostly secular shows in the evenings and actual church services on Sunday to keep up the non-profit end of the bargain. Driscoll always hoped to lure people into the church this way, especially the under age crowd. But the booking agent and some of the other employees who weren’t part of the church would always be sure to remove any and all religious paraphernalia before each show so as not to “weird people out.” This may be one of the main reasons the club lasted as long as it did. When Driscoll decided to fire his employees who weren’t part of the congregation, the club aspect quickly disintegrated. Word had gotten out that Driscoll and Mars Hill weren’t really as accepting as they let on. Driscoll’s services were extremely fear-based and he held on to some very misogynistic views about “family values.” Women can have all the tattoos they want, but don’t even think about putting on those shoes and stepping out of the kitchen.

The most satisfying part of the documentary is Driscoll’s downfall. But it’s sad that he took the Paradox with him. It clearly meant a great deal to a great many people. All-ages rules have since lightened up, but the brief “Complete History” segment of the film identifies a sick pattern in Seattle’s history. The history portion itself feels a bit rushed. It would have been more organic to pepper it throughout the film. There is also an epistolary narrative element that is a little confusing. But Toti’s thesis is clear.

Since Seattle’s inception, there has been a constant tug-of-war between those wanting to uphold “traditional values” and those wanting to build a vice industry. Seattle is in itself a paradox – at once progressive and puritanical. We had prohibition even before the ratification of the 18th Amendment, yet we also had one of the largest bootlegging operations in the country. Today, we don’t allow alcohol in strip clubs. In restaurants, there must be a metal railing separating the bar from the rest of the establishment to protect children from the demon liquor. However, adults outside the railed-off area can order drinks to a table full of kids. Until 2012, we could only buy alcohol at a smattering of state run liquor stores with inconvenient hours. We have legal marijuana, but nowhere to legally smoke it outside of private residences. Sometimes it feels like we’re all a bunch of adults who still live at home and are expected to follow the same “house rules” we were subjected to as minors. I’d like to see a documentary explore just this subject in greater detail.

Mark Driscoll was the embodiment of this paradox, which is why he was able to profit from it until his own congregation ousted him in 2014 amidst accusations of plagiarism and corruption.

Toti’s experimental documentary is unlike anything you have ever seen before. That alone makes it worth your time. But the film is also a fascinating convergence of a number of these seemingly disparate subjects.