(Fynbos world-premiered at the 2012 Durban International Film Festival. It has its North American Premiere at the 2013 Slamdance Film Festival, where it screens on Friday January 18th at 7pm and Tuesday the 22nd at 12pm.)

A nicely-dressed blond woman moves hesitantly through a back-alley in a shabby neighborhood, backlit by harsh, cold sunlight. On the open street, she drops her wallet, coins, passport, and then her entire purse into a trashcan, then calls the police to report she’s been robbed. There’s an intensity in her performance and a quiet authority in the compositions that marks this as a work of remarkable vision. Director Harry Patramanis, who co-wrote with Jonathan Glatzer, has established with a few bold and suggestive shots the suspense and enigma at the center of Fynbos.

Meryl (Jessica Haines) appears to have genuinely experienced some kind of trauma, but the only point of entry to her thoughts is what she writes in her little black journal, which seems untrustworthy. Her husband Richard (Warrick Grier) is puzzled by her mood-swings, and in any case has more important things on his plate: he’s in desperate financial straits. He whisks Meryl off to their stunning, unfinished glass house out in the middle of the brushy, rocky terrain on the Western Cape of South Africa—he’s only a few days away from losing the house, and a wealthy British woman, Anne, is coming to stay overnight with an eye to making an offer.

What follows, storywise, is an intricate and suspenseful six-way chess game between Meryl, Richard, Anne, Anne’s brother Lyndon, VJ (a sort of houseguest/caretaker) and Renee (a groupie type who’s tagged along with VJ). Toni, a poised and savvy black female cop from the local township, is a kind of parent/conscience/referee. Unlike a typical suspense drama, Fynbos plays out largely in the characters’ wordless behavior and their relationship to their physical environment. Dialogue appears for the most part in brief skirmishes between the characters. We see them screened off behind wide sheets of glass; looking ghostlike through sheets of plastic; bathing (each of the women in turn, interestingly) in an inky-black lake; disappearing into the rocks. A distinctive, sustained, high-pitched tone wafts into the film repeatedly, as if coming up from the earth. 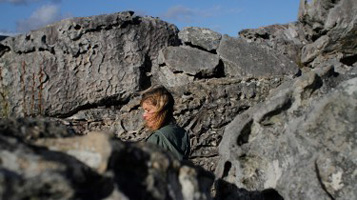 The glass house itself, with its setting on ancestral tribal land, is metaphors within metaphors. On the one hand it’s a symbol of power—Richard points out to Anne that “from the house everything you can see is yours.” “All that I survey is mine,” Lyndon parrots back, dripping with sarcasm, “isn’t that just the brass ring of human achievement?” And in reality this symbol of power is unfinished, inherently fragile, and has the potential to cost Richard everything he has.

While rigorously contemporary, the film has deep roots in film history. When Meryl goes missing, seemingly swallowed up by the rocky landscape, the nod to Antonioni’s L’Avventura is unmistakable. There’s a classic Hitchcockian MacGuffin in the form of Meryl’s journal. The film in certain aspects evokes the early films of Peter Weir, like Picnic at Hanging Rock and The Last Wave, suspense films which similarly charted white settlers’ uneasy relationship to aboriginal land.

And that relationship is a major subtext/leitmotif of the film. A series of exchanges between Richard and Anne reveal ambivalence, fear and guilt. “Is it safe, this area, with the township over there?” Anne asks Richard. “They must know that we’re here.” “They?” interjects Toni, bristling at the suggestion that the local people are “the other.”

Named after the characteristic bush that grows in this land, Fynbos goes deep into its subjects’ psyches as they play for huge personal stakes, flirting with self-destruction over ownership of a piece of land that in a sense can’t be owned. It puts a mastery of film language at the service of expressing something like the intangible spirit of a place, creating a microcosm of a world out of balance.