(A Brave Heart: The Lizzie Velasquez Story made it’s debut at this year’s SXSW Film Festival where it won the audience award and has been breaking and warming hearts all year long. It will be available from Cinedigm in September)

In the nerve-jangling climax to Robert D. Siegel’s poignant and heartbreaking Big Fan starring Patton Oswalt, Oswalt’s Paul Aufiero points a gun at the guy who has been bullying him and ruined his life for no reason. In that tense scene, Aufiero says to him, “You didn’t have to be mean.” This line was a swift and hard jab to my emotions, and I often think about that unforgettable scene.

It’s important to mention because like A Brave Heart: The Lizzie Velasquez Story, it has a potent and powerful message about one of humankind’s most foolish acts: bullying.

There are really ugly people in this world. People who want to poison and destroy others, and most of the time without reason. Sometimes people are afraid of what they don’t understand, but often it’s to laugh at another’s expense. The Internet has made it possible to hurl piercing insults without any repercussions or a good old-fashioned ass kicking.

Lizzie Velasquez became a victim of relentless bullying as early as she can remember. She was born with an undiagnosed condition that inhibits her ability to gain weight, she’s blind in one eye and has protruding teeth. This made her an easy target from adolescence through high school, and still as an adult from people without souls. (For the record, those teeth are a blessing — she has a big, gorgeous smile that glows and can really light up the room.) 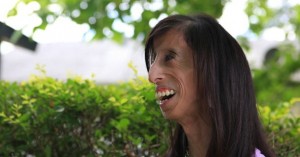 To bring you up to speed, some shitbird made a YouTube video called “The World’s Ugliest Woman.” That woman featured in the video is Lizzie. You have probably seen it or would recognize Lizzie if you saw a photo. To make this situation worse, the comments on this mean-spirited video were just as, if not more, ruthless and crushing than the video.

But this little lady is a fighter. Instead of getting revenge on the sonofabitch who made the video, she fought back in the smartest way possible: with kindness and sympathy. She embraced that horrid video and started her own YouTube channel, inviting anyone — bullies included — to join in on the discussion of the videos she made. Now she uses what she’s learned to speak out against bullying at conventions and other places that invite her. She has the good sense to recognize that bullying isn’t going to stop but she’s going to do everything in her power to bring awareness to as many people on this planet as she can on the painful (and often permanent) effects bullying inflicts. She speaks from her heart, and even though she’s quite petite, her message is louder than a bomb.

A Brave Heart is a real tearjerker but not in a somber way. Most of the tears come from how jubilant Lizzie is when she faces doctors, fans, and anyone else who comes across her path. Her infectious smile never leaves her side. It’s inspiring.

Instead of exploiting Lizzie and all of the bullying she’s endured, director Sara Bordo chronicles Lizzie’s triumph over adversity and we watch as she speaks at conferences in front of thousands all around the world. Lizzie’s current (and at times, stressful) life unfolds as the camera rolls. Bordo shows us how Lizzie fights back: with compassion. Lizzie is always calm in the film, and this puts the viewer in a state of serenity. It’s a peaceful movie to watch about a rough topic.

Watching the remarkable A Brave Heart is rewarding and helps restore faith in humanity. We live in a world where all of us have to face rotten people, often daily. A Brave Heart shines a bright light on hope and reminds us that it’s OK to hurt. It’s a heartwarming film on a beautiful soul who is confident in her own skin. Prepare to be moved and exhilarated.