The 4th Annual Oak Cliff Film Festival in Dallas officially kicked off on Thursday, June 11 but I arrived a day early to get the lay of the land. I’m glad I did because there was a festival pre-party that was a perfect way to reconnect with old friends and get a good glimpse of how the festival would proceed. 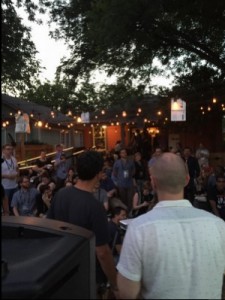 In what I now know of typical Oak Cliff Film Festival style, the pre-party featured a great group of local people excited to see some films as well as delicious tacos and complimentary drinks. The event was held outside at a very cool bar/bookstore called “Wild Detectives” that had a cool Texas backyard vibe. I will say, I’m a huge sissy when it comes to hot weather and Dallas was especially steamy that night. But alas, it is summer so I came prepared both mentally and style wise.

Following the party many of us headed over to a local bar where we could chat more and find out what each others plans were for the festival. I was really excited to hang out with Hammer to Nail regular Zach Clark (White Reindeer) as well as finally getting to meet Charles Poekel who’s film Christmas Again has been having a spectacular festival run. From there it was time to call it a night as the next day would be the opening night with another film having an epic festival run, Sean Baker’s Tangerine.

I’d been excited to see the film as I’m amazed by what I saw in clips and previews of how the film looked considering it was shot entirely with iPhones. Would this be a clever gimmick or would the film succeed on its own? I felt the entire film including the fact it was all done on an iPhone was fairly miraculous. The ability to use such a small device to capture scenes adds to an overall immediacy the film has and Bakers use of non-professional actors really brings the whole high-pitched film into focus. Baker  remains a filmmaker to watch and his one-two successful punches of Starlet and the upcoming Tangerine should allow him to make some pretty amazing next few films. 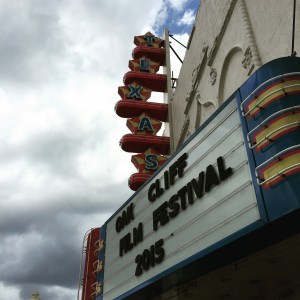 After Tangerine there was a very fun and social party at the Texas Theater itself which is the main venue for the fest. I talked about the origins of the fest and how I (finally) got to be involved a few weeks back. But I just wanted to add that since I’ve now seen the Texas Theater, I cannot recommend you check it out highly enough. It’s a classic old movie palace with a fun and funky core to it that’s fun to be a part of. From the photos on the wall to the unique missionary type design, it’s a one of a kind and the team who relaunched the theater are doing a fantastic job with programming as well as keeping a fun cinematic aesthetic.

The next day was pretty much all Neil Hamburger, which was fine by me. I’ve long been a fan of his and I was also pretty taken with Rick Alverson’s film The Comedy when I saw it a few years back. The combination of Hamburger and Alverson in the directors newest film Entertainment seemed like a perfect duo and indeed, it didn’t suck. Following the film was a nearly full-hour standup routine by Hamburger and while nearly three hours of that character (the legennnnnndary character) was more than enough, it was still a fun night that ended up in yes, another party.

I did attend a panel on DIY filmmaking today that was very cool but I think I’ll save that until my wrap-up as it involves Nick Zedd, a seminal DIY film pioneer and Beaver Trilogy director Trent Harris who is also the subject of Beaver Trilogy IV which is happening in a few hours. If you’re in or around Dallas, come check it out. You won’t be sorry!