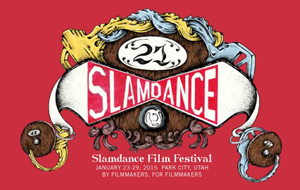 (Slamdance 2015 runs from January 23r-29th in Park City, Utah. Visit the festival’s official website for more information. FULL DISCLOSURE: Paul Sbrizzi is a features programmer for Slamdance, but wears his film-lover unitard for the purpose of this piece.)

Slamdance comes of age this year with an altered-state visual identity that emphasizes its underground roots, courtesy of mad genius Steve Girard, the creator of last year’s mad short Wahd Ahp. Slamdance still programs its lineup entirely from blind submissions, and the narrative and documentary feature categories are restricted to first-time directors and budgets under $1 million. There’s a lot of early buzz for Colin Offland’s documentary Dennis Rodman’s Big Bang in Pyongyang, Branden Kramer’s terrifying Ashley Benson-starring thriller Ratter (in which a stalker watches her every move by hacking into her electronic devices – yikes!), and Gabrielle Demesteere’s Yosemite, which features James Franco (who wrote the short story it’s based on) in a supporting role. Here is a tiny pu pu platter of capsules drawn from the many films to be screened. 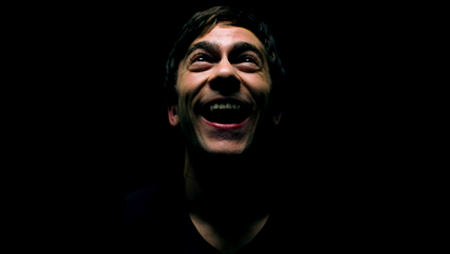 In They Look Like People, a straightforward story about a guy named Wyatt coming to New York City and reconnecting with his good friend Christian soon becomes a scary ride into Wyatt’s warped psyche and his paranoid fantasies about the people around him becoming shape-shifters. After thoroughly freaking out Mara, a potential love interest (who turns what seems like a victim scenario on its head, warning Wyatt to get out of her way “before I hurt you”), the men’s bond of friendship is put to the test in a terrifying game of trust. Director Perry Blackshear takes a premise that could easily have come across sensationalistic and roots it in fully developed characters; he creates what feels like a big movie with a beautifully simple production. 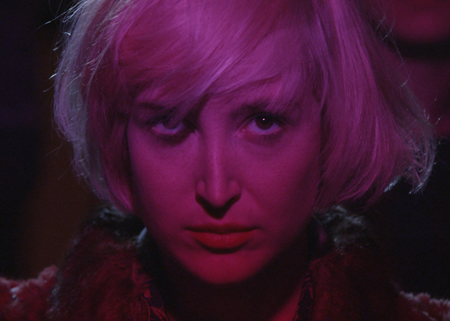 Probably the most memorable performance of the festival is Leah Goldstein in Pavan Moondi and Brian Robertson’s very dark indeed comedy Diamond Tongues. With her mop of messy-on-purpose blond hair she seems at first to be a cool, supportive member of a community of Toronto actors, but there’s something off—a kind of bottomless-pit-of-need quality to her dark eyes. As Edith, Goldstein creates an iconic character consumed with envy in a way that’s both extreme and relatable: her bad behavior gradually escalates from a creepy childlike compulsion to talk about other people’s experiences as if they were her own to dreaming up hilariously devious ways of sabotaging her best friend’s career. 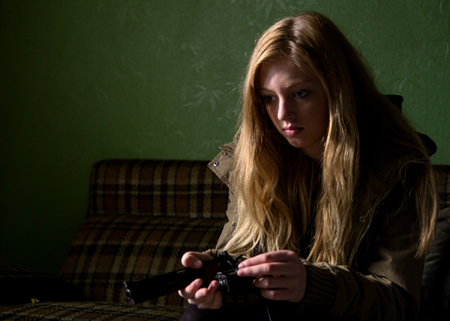 Darkness On The Edge Of Town

In rural Ireland, teenage Cleo is obsessed with finding her sister’s killer and avenging her death, not realizing that her best friend is the culprit. Director Patrick Ryan brings a mythical quality to Darkness on the Edge of Town, his gritty story of a regular girl with a larger than life destiny. Lead actress Emma Eliza Regan is super intense as quiet, brooding, principled Cleo; she’s perfectly matched with reckless, childlike Robin, played by Emma Willis. The film has the feel of a modern Western, building to a Peckinpah-worthy blood-drenched climax. 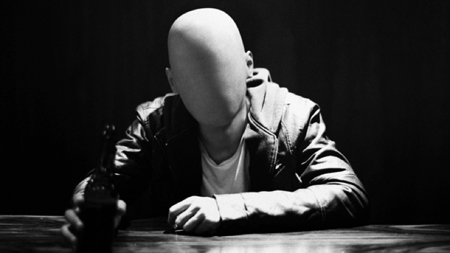 In Asco, an artist channels his rage at getting dumped by his girlfriend into an escalating series of elaborate and imaginative schemes to destroy her life. Brazilian director Alexandre Paschoalini sets a new bar for revenge fantasies, expressing the fire of unrequited love with striking black-and-white imagery, taking full advantage of lead actress Sol Faganello’s amazing blond afro. The film has a graphic novel visual quality and the story goes to similar extremes; a sequence involving the ex’s new boyfriend is dark/outrageous/hilarious like nothing you’ve ever seen. 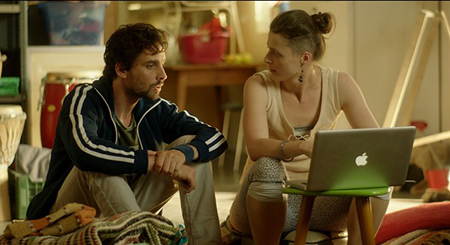 Daniel is a member of an acting troupe who doesn’t get much respect from his family. “In reality his hobby is acting,” his father says, “and his main profession is begging. And I’m his boss. Right?” In High Performance, Daniel’s brother Rudi is killing it in the corporate world, and hires Daniel for his acting skills, to get information out of one of his top employees. While director Johanna Moder’s sympathies are clearly with Daniel, she brings out the complexity of the brothers’ relationship in a way that’s both surprising and authentic. The film builds to a high-stakes corporate power struggle, but Moder keeps the story rooted in an organic ecosystem of characters and institutions—equally satirizing young idealists and capitalist culture. 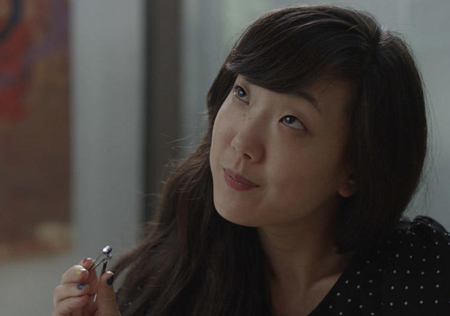 Modern-day information overload is much bemoaned, especially by us arty types; Phoebe seems to feel quite the opposite. In Female Pervert, director Jiyoung Lee (who starred in the much-loved Slamdance 2010 comedy Pleasant People) and lead actress Jennifer Kim create a character endlessly fascinated by arcane bits of information; her attention is constantly getting trapped in seemingly random and arcane cubbyholes. In particular, Phoebe has some comically specific sexual proclivities, which sabotage a series of dates and get channeled into a video game that involves removing hairs from a man’s body, one at a time. It’s a totally idiosyncratic, absurdist take on a world where nobody really connects; where at best people’s individual neuroses briefly collide. 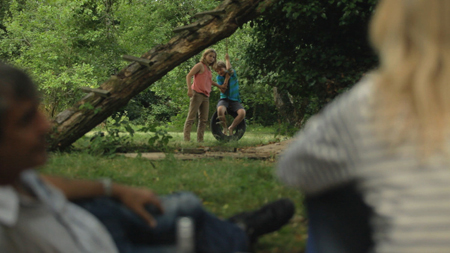 The Trouble With Dot And Harry

The Trouble with Dot and Harry is director Gary Walkow’s story about Richard, a self-absorbed American writer who gets stuck with the unexpected task of looking after his ex’s kids, a pair of ridiculously charming and precocious British tweens (played by Walkow’s own son and daughter). Walkow pulls off the difficult task of inspiring understanding and empathy for a less than sympathetic character: through his gift for storytelling, Richard is able to forge a real human connection with the kids, and he’s changed by the experience in a subtle but powerful way. Did I mention how great those kids are?

Stephen Richter follows up his crazy-intense Portuguese-language debut Center of Gravity with Birds of Neptune, a dense stew of family dysfunction and romantic intrigue. Orphaned adult sisters Mona and Rachel are living alone in their big family house, in a kind of suspended reality, when Mona meets a smooth operator named Zach, who senses a power vacuum and quickly gets to work. Richter has a unique and effective stylistic device of letting scenes dissolve into music, leaving his characters floating in the mood of the song. He’s one of the most exciting directing talents to emerge in recent years. 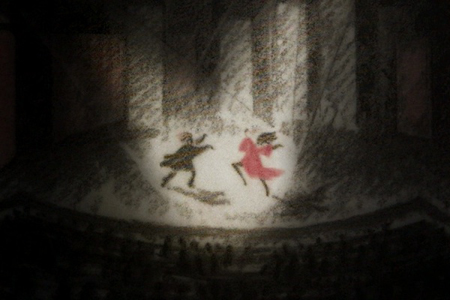 Maurizius Sterkle Drux’s Concrete Love – The Böhm Family is a fascinating portrait of the family of the celebrated German architect Gottfiried Böhm (who is still working at age 94) in which passions and dreams seem to take physical form in the buildings they design. The film follows Gottfried and his three architect sons as they lose their creative and emotional center—wife and mother Elizabeth, a talented architect herself. It’s a quietly touching movie that allows the complexities of family dynamics and clashing egos to emerge organically. 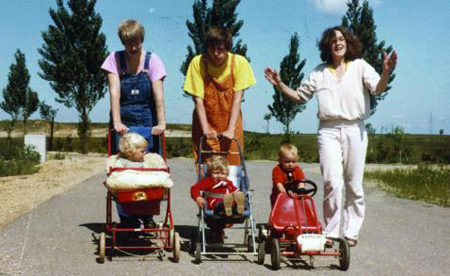 My Fathers, My Mother And Me

My Fathers, My Mother and Me director Paul-Julien Robert grew up in a free-love commune in Switzerland where artistic expression wasn’t just encouraged, it was mandatory. Daily life was exhaustively recorded, and Robert draws on a massive video archive to paint a picture what seems at first like an idyllic existence but gradually reveals a pattern of increasing psychological abuse by the commune’s megalomaniacal leader. Footage of the public humiliation of a 9-year-old boy who attempted to rebel is one of the most horrific documentations of psychological child abuse I’ve ever seen. Robert travels back to the site of the commune with his mother, and confronts her with the video footage of what happened to him as a kid. Her permanent frozen, knitted-brow facial expression conveys a combination of horror, guilt and confusion about how the idealistic belief system of her youth could have led to something so wrong and harmful.