Watching a hearty batch of screeners back-to-back-to-back for many of the films playing in the 10th anniversary edition of the “Premiere Brazil! 2012” series (a collaboration between MoMA and the Rio de Janeiro International Film Festival), it was impossible not to notice, and become amused by, the pre-film company/institution title card scrolls, of which each film had a borderline preposterous number (was that seven? was that ten?!). But knowing how hard it is to get a film made these days—narrative, documentary, or otherwise—one’s sarcasm should quickly turn to admiration, for here were these films that had been produced with the support of so many different sources. Here were these films, period.

As for the 15 or so features in this year’s program, they cover an impressively wide stylistic gamut. Narrative-wise, there are period-sweeping Hollywood-esque epics [Dirty Hearts (Corações Sujos) and Matraga (A Hora e a Vez de Augusto Matraga)], there’s a noir-tinged biopic [Heleno], there’s a saucy, sexy dramatic thriller [I’d Receive The Worst News From Your Beautiful Lips (Eu Receberia as Piores oticias dos seus Lindos Labios)], there’s an experimental narrative that plays like Pedro Costa’s In The City of Sylvia [Passerby (Transuente)], and there’s an omnibus film that tackles the incredibly complicated dynamics of favela life in Rio [5 x Favela: Now By Ourselves]. But for my money, the non-fiction films are the true standouts. 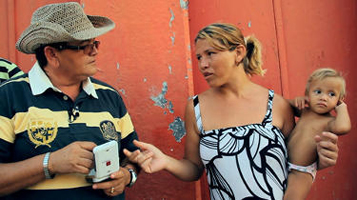 The two titles that invigorated me the most deal directly with present-day, real life issues of the most complex proportions. Look At Me Again (Olhe pra Mim de Novo) is a piercingly honest portrait of Silvyo Lucio, who lived as a lesbian before transitioning into a man. Silvyo embarks on a road trip to question doctors and other experts about the realistic prospects of creating an offspring with her wife that would contain both of their DNA. Along the way, we learn of Sylvyo’s expectedly difficult time becoming the person he was meant to become. A particularly emotional scene occurs near the end of the film when Sylvyo sits down with his daughter, who clearly loves the human who gave birth to him but finds it maddeningly unable to accept.

5 x Pacificação: Peace in Rio is by no means great cinema—it was made by the young directors behind 5 x Favela: Now By Ourselves, who were all just about brand new to the filmmaking process—but it takes an honest approach to exploring the Rio government’s creation of the UPP (Unidade Polícia Pacificadora) in order to bring stability to favela life as well as restore credibility to the city’s increasingly corrupt police force. The filmmakers break their subject down into five chapters: 1) “Hills” explains the purpose of the UPP and argues that the controversial and hugely popular funk parties should not be a police issue; 2) “Police” addresses the change in attitude from previous police regulation to the UPP; 3) “Criminals” introduces several young men who express just how difficult it is to go straight and live a clean existence though they are committed to doing just that; 4) “Hills” discusses the need for a more seamless and welcoming integration between the “asphalt” (city) and favelas; and 5) “Compound” tries to explain how distinct each favela is and how the previous police raids only made things worse.

If you’ve never been to Brazil and aren’t planning on getting there anywhere soon, diving headfirst into “Premiere Brazil! 2012” surely doesn’t compare to laying out on one of the country’s impossibly gorgeous beaches—let’s face it, not much does—but it does provide a well-rounded window into the state of cinema, and life, there.