By a strange coincidence, I saw the second NYFF screening of Steve McQueen’s debut feature Hunger the night before I attended the press screening of Steven Soderbergh’s long-awaited Che. Why strange, why coincidental? Because the two movies shared so much in the way of subject matter, themes, and formal strategies that they seemed to be in dialogue with each other.

Both are biopics. Che’s main character is well known. Hunger’s subject is less so, at least to most younger Americans: Bobby Sands, leader of a 1981 hunger strike by a band of IRA members doing time in a Northern Ireland prison. Their main demand was to be treated as political prisoners, and thus be granted certain rights not given to common criminals. Sands was the first to begin his fast (the strikers worked in staggered shifts), and the first to die, after 66 days, followed by nine others. 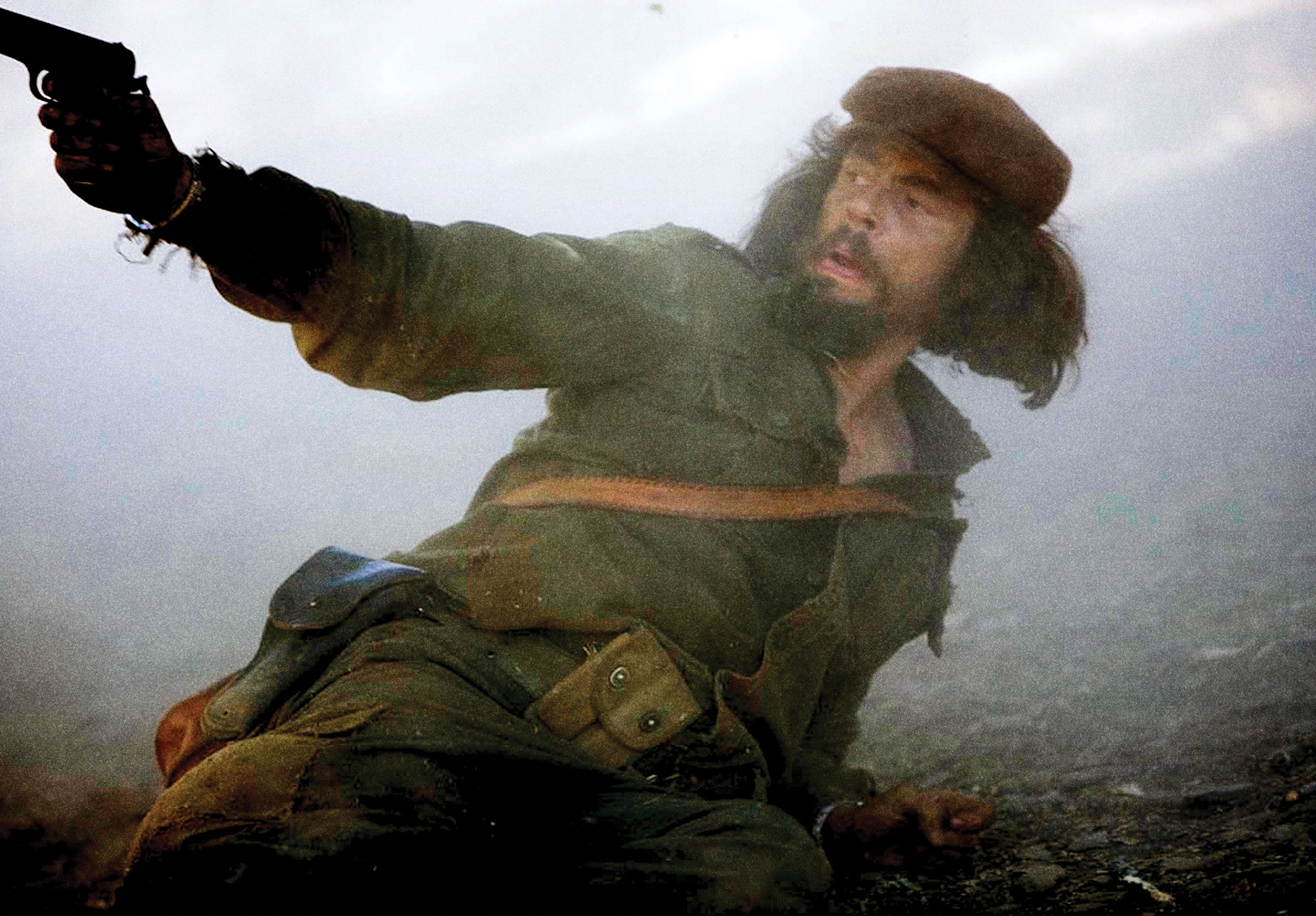 Soderbergh’s film comes in two parts, each of them over two hours long. Part One, “The Argentine,” covers the years 1955 to 1959, from Ernesto Guevara (Benicio del Toro)’s initial meeting with the brothers Fidel and Raul Castro in a Mexico City apartment to their triumph over the U.S.-backed dictatorship of Fulgencio Batista. Part Two, “Guerrilla,” details Che’s doomed attempt to repeat his Cuban success in Bolivia, ending with his death in 1967. (Interspersed throughout Part One are brief scenes re-enacting Che’s 1964 visit to the United States.)

McQueen’s film clocks in at a brisk 96 minutes. But Bobby Sands doesn’t really factor into the story until we’re nearly at the midway point. Instead, Hunger begins by aligning our point of view with that of a tough prison guard. After a while, the perspective shifts to two IRA prisoners. All this is prelude, serving to establish the context of the hunger strike to come. Finally, Sands (Michael Fassbender) takes center stage. There’s a long scene that sets up the strike (more on this later), then we stay with Sands as he slowly wastes away. When he dies, the film ends.

Che is a sprawling epic, while Hunger is tightly compressed and fast on its feet. Both are full of action and intrigue and moments of high drama. And yet both come off as quiet, patiently observant viewing experiences, immersing you in the processes of their characters’ daily lives. What is it like to wage a guerrilla campaign? How do you deal with deserters, or slackers, or insubordinates? How do you win over fearful or hostile peasants? Soderbergh shows you. McQueen, an acclaimed English video and installation artist, likewise takes his time capturing the prison’s atmosphere: the guard washing his bloodied knuckles after a beatdown, the prisoners balling up their secret messages into chunks of bread and swallowing them in anticipation of being strip-searched, the streams of urine flooding the prison corridor as the jailed IRA men, in protest against the guards’ latest outrage, empty their piss-pots under the doors of their cells.

Soderbergh said during his post-screening press conference that he wanted to avoid the kind of typical biopic moments that have, by long-standing tradition, made a sorry joke of the genre—the “Hey, why do they call you ‘Che’ anyway?” and why-Che-wears-a-beret scenes. He largely succeeds in this, spurning conventional melodramatics, and concentrating our attention instead on the gradual accretion of meticulously researched historical detail. Also fascinating is the film’s diptych structure, in which the strategies and tactics that worked so well in Part One’s Cuba end in failure in Part Two’s Bolivia. The triumphant march toward victory becomes a road to nowhere. It’s like a story Kubrick would’ve told, the seemingly foolproof system breaking down into entropy, destruction, and death—basically, the story of Dr. Strangelove, 2001, and Full Metal Jacket.

I admire the ingenuity of the concept, and the rigor with which Soderbergh has executed it. He pulls off some impressive set pieces, and conveys a powerful sense of shifting moods. But ultimately, nothing that happens within the film is quite as compelling as the conceptual brilliance of its structure. If Soderbergh spares us the usual lame biopic beats, he also denies us emotional engagement, psychological insight, and any sense of the world beyond the film’s immediate concerns.

Che’s most passionate admirers have defended it for precisely this absence of directorial button-pushing and string-pulling, for its detached, cool-headed adherence to the historical record. I understand the argument, and if I go back to the film a second time, I might be more persuaded by it. But on first viewing, I felt that Soderbergh’s obsession with verisimilitude and historical accuracy prevented him from unleashing the full strength of his intellect and imagination on the material. 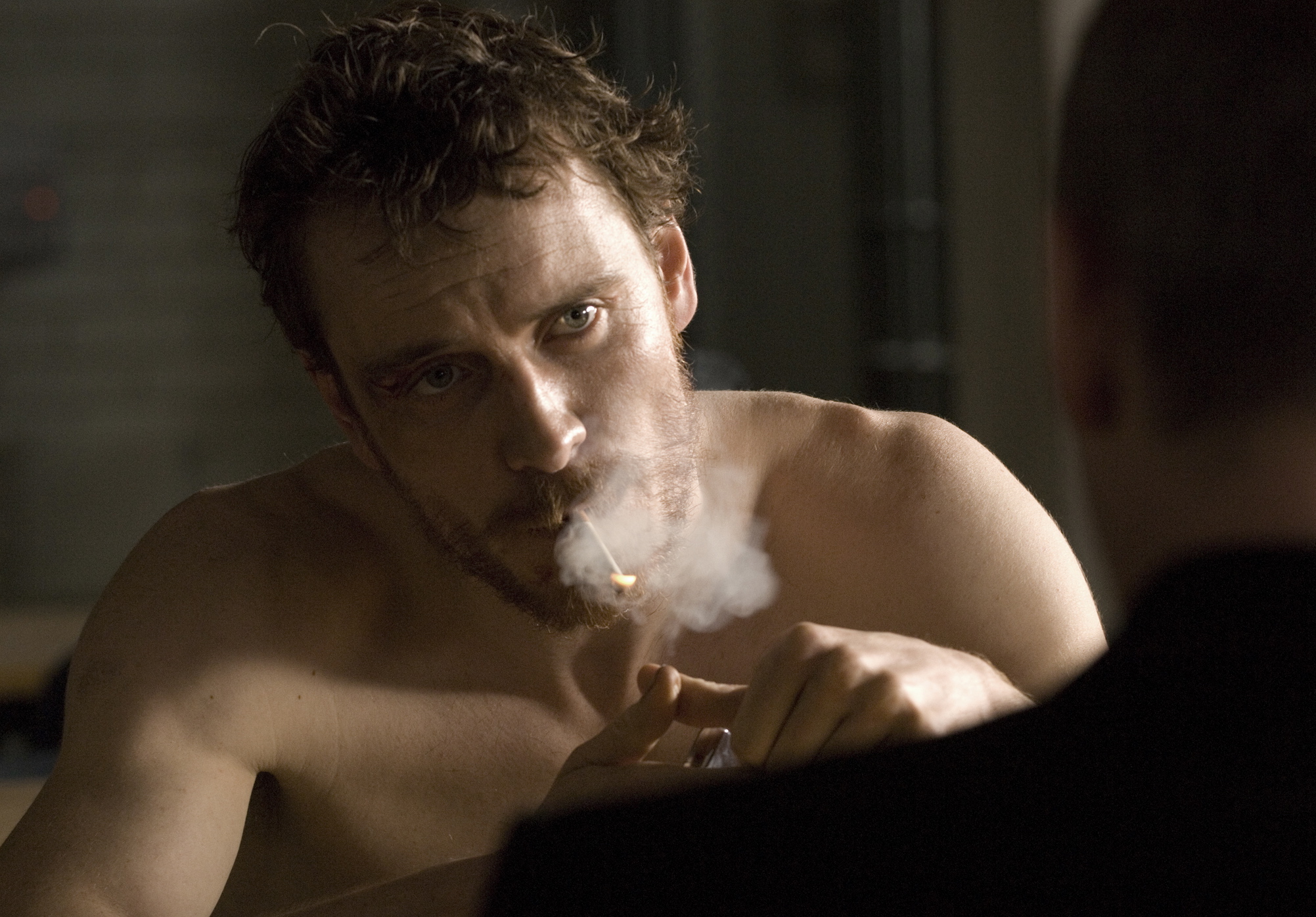 Just as Soderbergh avoids grappling with the larger meaning of Che’s struggle (there’s not even a whisper of an attempt to address the irony that this heroic idealist’s greatest achievement was to replace one dictatorship with another), McQueen abjures any big-picture overview of the IRA’s long and bloody fight for Irish self-rule, or of Sands’s legacy within that fight. But Hunger has a visceral intensity, and an expansive view of history and politics, that I missed in Che. The intensity comes from McQueen’s imagery, which is both exquisite and brutal, lyrical and “poetic” yet shockingly immediate, meticulously composed but bursting with deep reservoirs of emotion. The historical/political perspective arrives in a single soon-to-be-legendary scene halfway through the movie. McQueen plants his camera in a stationary two-shot of Sands and a priest (Liam Cunningham) who has come to visit him, and keeps it there as Sands reveals his plan for the strike, the priest tries to talk him out of it, and the two argue back and forth over the morality and efficacy of such an action. Right up to the start of this shot, and for most of what comes after, Hunger is close to a silent film, but for the duration of this very long scene McQueen and his co-writer, playwright Enda Walsh, let the characters talk, and talk, and it’s completely riveting. I don’t want to say any more about the scene—viewers should discover it for themselves. But when it’s over, we know what’s at stake in the strike, we know what’s led Sands to this point, and we’re left in a state of heightened tension over what’s going to happen next.

What happens next is that Sands slowly starves to death. Fassbender went on an extreme diet to lose weight for these final scenes, and it’s alarming to watch as his flesh shrivels and the light goes out of his eyes. McQueen goes beyond historical inquiry and humanist drama to evoke deeper mysteries of the body and soul. Hunger is a stunning debut.

(Both Che and Hunger will be distributed by IFC Films in the United States. Check IFC’s website for details as they appear. Part Two of my NYFF report will appear on Wednesday.) 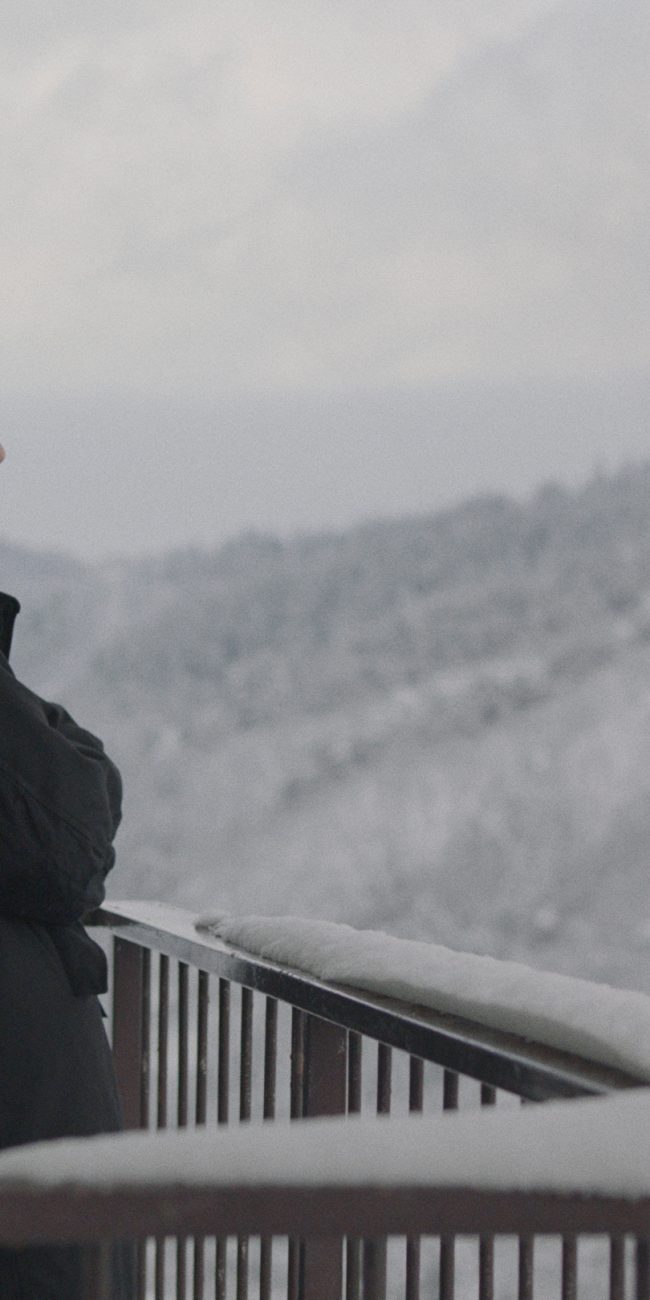