I don’t think I need to explain how essential the World Wide Web is to our daily lives. And yet, as evidenced by the opening of Jessica Yu’s short film, Foreveryone.net, very few people know who is behind it all. That person was a humble genius named Sir Tim Berners-Lee, and he’s perfectly content living in obscurity because he didn’t invent it for notoriety and profit. He did it because it was the right thing to do.

Foreveryone.net tells the story of Berners-Lee and how he came to create something that changed the landscape of the world forever. But it also goes beyond his story, making a strong case for the magnitude of Net Neutrality – that is, keeping the internet free and accessible to everyone in the world, regardless of location or socio-economic status. Berners-Lee knew that the only way to do this was to limit, if not outright avoid, regulation of the Web.

Berners-Lee might shy away from acclaim for his invention, but Yu is determined to give credit where credit is due, as well as highlight the importance of maintaining Berners-Lee’s original vision. The Internet existed before 1989, but it was only accessible to those who had a comprehensive understanding of computer programming. Berners-Lee began with the notion that computers are more powerful if they connect. And not just to one point, but to each other. “What matters is the connections,” he says. A word on its own doesn’t mean as much as a word linked with other words. So it is with ideas.

Yu’s film is riveting, illuminating, and vital. In addition to hearing from the man himself, she interviews Berners-Lee’s peers and admirers, as well as the woman who is ultimately responsible: his mother. Every word out of this woman’s mouth is rife with profundity, and it’s evident that her free-range brand of parenting facilitated her son’s future achievements. 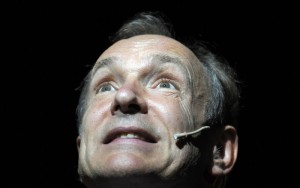 You can accomplish so much with the World Wide Web. It’s so rare that we don’t find what we’re looking for on Google in a matter of seconds. We can’t take this resource for granted and we have to keep fighting for it. Berners-Lee’s biggest fear has always been that some government or organization will take control of the Web. Though we won the first battle for Net Neutrality in 2015, the stakes remain high and the fight is far from over. As long as there have been people, there have been those who would squelch the masses. These issues have been explored in recent dystopian novels, like Dave Eggers’ The Circle and Ernest Cline’s Ready Player One, both of which depict frighteningly plausible outcomes for the Web. That is why it is imperative that it remains with the people.

My one complaint about Yu’s film is that I could have watched Berners-Lee and his fellow interviewees speak for much longer than 34 minutes. His mother, in particular, deserves her own film. Foreveryone.net ought to be required viewing for all who use the web. It’s crucial that we understand and remain true to Berners-Lee’s mission statement. He has given us the ultimate gift. As Mary Lee Berners-Lee says, “keep them safe but let them discover the world”. Thanks to her son’s beautiful gift of the World Wide Web, we are all able to do just that.