(Earlier this month the world lost renowned filmmaker Chantal Akerman. Yet her films will always live on and her final film, No Home Movie which recently played the New York Film Festival, was a touching yet realistic sendoff to a cinematic great.) 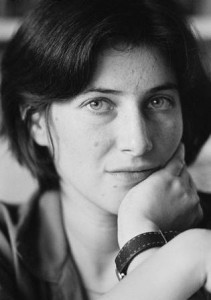 The films of Chantal Akerman exist within the space between what we say and what we mean. There was a gap between language and the reality that she wanted to explore, so she invented a new, more efficient and less artificial, grammar.  As B. Ruby Rich said, she is “capable of transmitting truths that were previously unspeakable.” Akerman’s films are made up of moments: snatches of micro-expressions in each geometric frame that capture specific, honest emotions that other filmmakers avoid, or don’t even know how to express. She was a master of empathy and a curious, incisive ethnographer of our most private thoughts and feelings.

No Home Movie is no exception to Akerman’s overarching philosophy. It’s painfully intimate and patiently generous and dregs up some intensely personal emotions from its audience. Paralleling 1976’s News from Home, in which Akerman received letters from her mother in Brussels while living alone in New York City, No Home Movie is constructed around a series of visits and Skype sessions between Akerman and her mother, Nelly. When Akerman and Nelly aren’t together (physically or digitally) – as the daughter must leave to attend film festivals, to film, to travel – the film is punctuated by a literal void: static shots of pure emptiness, from wind-strewn deserts to overgrown backyards. Life doesn’t exist when she’s separated from her.

Akerman’s camera is often intrusive, aching with the need to consume and preserve her aging and, eventually, ailing subject. It’s even a little selfish, in a wrenchingly relatable way: the camera is oppressively present whenever they’re together. It records Nelly eating and sleeping. It burrows into an extreme close-up of her face during a cringingly endless Skype call where Akerman refuses to hang up. Chantal, by comparison, is almost never seen on camera, hiding behind the lens unless it’s unavoidable: she falls over a chair and slumps into frame, she swipes through a wide shot while preparing a meal.  Akerman is very aware of this trenchant selfishness. She grills her mother, a concentration camp survivor, on her past at dinner, while Nelly complains that Chantal never tells her anything important about her own life. In one especially candid shot, Nelly is told by her caretaker that Chantal “knows that [Nelly’s] anxious, but doesn’t understand that she’s the cause.” Akerman nakedly makes her compulsory need for her mother bracingly clear, therefore making the inevitable conclusion all the more heartbreaking. 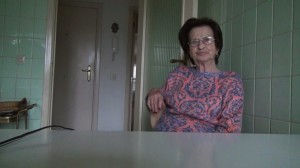 As always with Akerman’s films, by the end I’m not sure whether to feel sad or understood, totally alone or in the company of solidarity. The first of her films that I saw was 1994’s Portrait of a Young Girl at the End of the 1960s in Brussels, part of a French series where filmmakers such as Olivier Assayas and Claire Denis were tasked with chronicling their youths. It follows a manic, melancholy teen skipping school to pinball around Brussels, eventually falling in step with an adoring floppy-haired army runaway who looks like a young Harmony Korine. The titular fifteen year old, Michèle, (Circé Lethem) betrays an intimate understanding of anxiety on Akerman’s part. Michèle continually transitions between quiet ruminations on suicide to tenacious proclamations of starting riots, much like the cathartic inferno eighteen-year old Chantal Akerman ignites in her first film, 1968’s Saute ma ville, a short that writhes with petulant, punkish youthful rebellion. I connected with both films immediately and cherished them for their sensitivity towards even the ugliest of universal human emotions.

As more and more of Akerman’s films become less difficult to track down, her influence on contemporary film is glaringly unavoidable. 1982’s Toute une nuit, a breathtaking compendium of romantic encounters – hookups, breakups, infidelity, dances – over the course of a single evening in Brussels, is a proto-Linklater experiment a decade before Slacker. It was fitting that playwright Annie Baker was in the audience at No Home Movie, as her candid, interpersonal investigations into our secret moments and linguistic shortcomings are heavily indebted to Akerman. Akerman’s films capture the seconds between when the curtain rises and the lights go on; when we are at our most exposed, our most solitary, and our most confused. She understood these feelings and knew how to communicate them. A world without her is going to be a much lonelier place.