(Ben Powell’s Barge was a bit hit at this year’s SXSW Film Festival and has been playing festivals throughout the year, even winning awards at several including Indie Memphis.)

“… water is the source of all life. Seven-tenths of this Earth’s surface is water. Why, do you realize that 70 percent of you is water? … And as human beings, you and I need fresh, pure water to replenish our precious bodily fluids.”- Brigadier General Jack D. Ripper, Dr. Strangelove or: How I Learned to Stop Worrying and Love the Bomb

Water gives and sustains life. Without it, we would not exist. Ben Powell’s debut feature documentary, Barge, reminds us of yet another reason water is so essential to the planet: as a conduit. Until the invention of railroads, airplanes, and then interstate highways, waterways – streams, rivers, lakes, seas – were our main transport routes. I knew that the oceans were still extremely busy, but had long assumed that, over time, the intracontinental cargo lanes (i.e., our major rivers) had been supplanted by land and air. I was wrong. There is, apparently, still quite a lot of important traffic on the great Mississippi, Missouri and Ohio rivers, to name just a few. Thank you, Mr. Powell, for the clarification.

Barge– like the vessel it showcases – takes its time. Gorgeously photographed (partially by Powell, a cinematographer as well as a director, who also shot this year’s A Brave Heart: The Lizzie Velasquez Story), the film is a wonder to behold, even if its ultimate lack of a traditional narrative may prove frustrating to some viewers. We loosely follow a disparate cast of characters aboard the M/V Mary Parker as they push and pull large metallic cargo containers from Rosedale, Mississippi to New Orleans. Much of what they do is monotonous, as the maintenance of closely monitored routines is the key to safety. These men (and they’re all men) each come from different walks of life, but what they (mostly) share in common is a strong work ethic and a hardy constitution. Conditions are tough on the water – boiling in summer and freezing in winter – and not for the faint of heart. 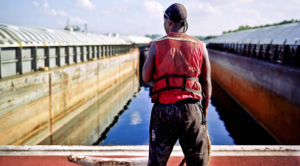 For some of the characters we meet, life on the barge offers a second chance. One man has served time in prison; another is living above the poverty line for the first time (and he looks over 50). Indeed, the shipping company profiled here seems to be one of the few employers that judges a man by the work he does, rather than the prior mistakes he has made. Kudos to them. And the work, itself, seems to be one of the few opportunities, as one of the film’s subjects declares, where a man without a college degree can make over $100,000 a year. Water revives fortunes, as well, apparently.

At just about 75 minutes, the film, gently paced as it is, does not overstay its welcome. In fact, I could have used a little more. Powell weaves many threads throughout the story, some of which beg for a little more concluding quilt. Still, what’s there is fascinating, with the hypnotic pull of the currents dragging us along into the existence of these men whose efforts bring us grain, cement, oil, and so much more. What is particularly impressive is the access granted to Powell: he goes everywhere with his camera, showing us both the good and bad in his protagonists. Barge is a mostly superb bit of filmmaking, and it’s no wonder that it’s been winning awards at film festivals this year, including Best Documentary Feature at the recent Indie Memphis. If it comes to a town near you, make sure to see it.