Picks of the Week: A Lee Chang-Dong Double-Whammy 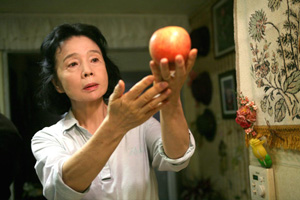 Poetry (Kino) — Mija (Yun Jung-hee) is a 66-year-old woman scraping by on her pension and her part-time earnings as a maid. She’s raising her sullen teenage grandson alone—her daughter, the boy’s mother, lives and works in another city. Although Mija’s memory is beginning to give her trouble and strange pains are afflicting her, she joins a poetry-writing class: a beautiful woman, elegant in dress and bearing, she now wants to learn how to create beauty in words as well. But even as she studies the names of flowers and contemplates the gradations of color in an apple’s surface, she finds herself pulled into the orbit of a horrific crime and forced to wrestle with an intolerable moral dilemma. Lee Chang-dong (Oasis, Secret Sunshine—see below!), a storyteller of remarkable power and fluency, packs his tale with startling plot twists and sudden eruptions of deep feeling. Poetry is as ethereal and delicate as a snowflake one moment, as brutal as an autopsy the next—an ever-shifting, ever-surprising wonder. Buy it on DVD

Secret Sunshine (Criterion) — What makes Lee Chang-dong’s film so special, and so timely for American audiences, is its central examination of religious faith (and faithlessness) as a deeply human experience, one fraught with hypocrisy, redemption and grounding in the context of real life. While Lee takes time to aim his camera (and narrative) at the heavens (the film’s opening shot of the sky is repeated at transformative moments throughout the film), he understands completely that the vagaries of human experience are far more important to belief than anything supernatural. The film ends with the camera panning to a patch of dirt, the tangible reality of terra firma a bookend to the film’s speculative opening shot of the sky, Shin-ae restored from the heavens back down to the earth, an imperfect, mortal world. Buy it on DVD

Troll Hunter (Magnet Releasing/Magnolia) — With Troll Hunter, Norwegian director Andre Ovredal delivers an electrifying and hilarious thrill-ride that feels like an instant mockumentary classic. But that’s the problem. To call Troll Hunter a mockumentary is to belittle it somehow, for while it certainly fits within those storytelling parameters—i.e., it’s photographed from the video camera perspective of a group of students who convince a gruff poacher to let them follow him around in the gorgeous Norway wilderness—it is so much more than that. In fact, Troll Hunter plays just as convincingly as a straight-up monster movie (ala The Host), albeit a much funnier one (and even though it takes some time for those monsters to appear). To be honest, it would be best to watch Troll Hunter in a jam-packed movie theater with an eager audience, but if you can’t wait, or it looks like it isn’t coming to your city after all, be sure to take the plunge and watch it at home. While it might not be as raucous an event on the small screen with only a few folks in the room, the exhilarating thrill of the achievement cannot be denied. This is a fun movie. Buy it on DVD

Don’t Be Afraid of the Dark: Special Edition (Warner Archives) — The original made-for-TV movie, this is, not the just-in-theaters remake. Buy it on DVD

Eclipse Series 28: The Warped World of Koreyoshi Kurahara (Intimidation, The Warped Ones, I Hate But Love, Black Sun, Thirst For Love (Criterion) — Buy the 5-DVD Set

Swingers (Miramax/Lionsgate) — Buy it on Blu-ray

Sympathy For Delicious (Maya Entertainment) — Buy it on DVD

The Greatest Movie Ever Sold (Sony Classics) — Buy it on DVD

Tracker (Lionsgate) — Buy it on DVD

Road to Nowhere (Monterey Video) — Monte Hellman’s return to the director’s chair makes for one strange ride. Buy it on DVD